Saskatoon man struggles to regain motor operate weeks after he was Tased by police, son says 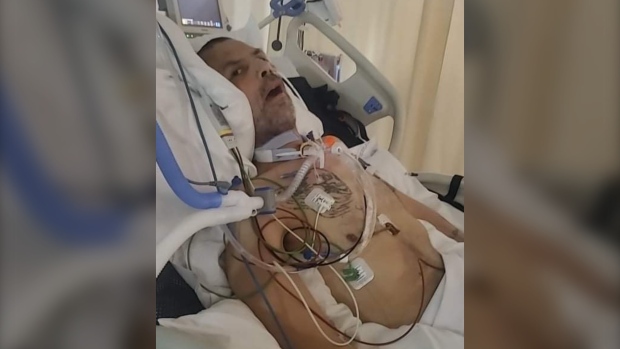 SASKATOON —
A Saskatoon man is still recovering in hospital weeks after an incident involving police – and his son is looking for answers.

On June 23 Raymond Montgrand was injured in a fall after a Saskatoon Police Service (SPS) officer used a stun gun during an alleged pursuit.

Following the incident, SPS asked Regina Police Service to investigate due to the injuries Montgrand suffered.

“When I first got there, two weeks ago, the doctor said that he had pretty bad brain injuries and they weren’t sure what was going to happen,” Montgrand’s son Ryan Ratt told CTV News.

“He was sedated for the first little while and then they took him off sedation. And he didn’t wake up for about four or five days.”

Ratt, who lives in Creighton, said he’s been making the trip to Saskatoon to spend time by his father’s bedside in intensive care.

“Right now they’re trying to teach him to lift his arms and move his fingers and wiggle his toes and stuff. He’s doing it for the most part but still not the greatest,” Ratt said.

According to a police news release issued in the wake of the incident, officers were dispatched after a man wanted on warrants was reportedly seen leaving a home in the 500 block of Avenue F South.

While the release does not name Montgrand, it details the alleged series of events leading up to his injuries.

Police believed Montgrand — spotted on a bicycle — matched the suspect’s description. He refused to stop for police, SPS said in its release.

Montgrand allegedly abandoned his bike on Avenue A and “fled on foot” into a restaurant where a pursing officer “confronted” him in the kitchen, according to SPS.

While in the kitchen with the officer, Montgrand allegedly claimed he had a gun before leaving out the back door.

According to SPS, once outside, Montgrand encountered more police officers and allegedly reached into the back of his shorts and threatened to shoot.

This was the moment when police used a stun gun on the 51-year-old man and he fell to the ground, according to police.

Police learned Montgrand had outstanding warrants for assault with a weapon and break and enter. However, he was not the suspect officers were originally looking for.

Ratt said he has questions about what happened during the incident and his father is unable to provide answers.

“Right now he can’t really answer too many questions or talk at all so I don’t know what he remembers,” Ratt said.

However, Ratt believes there could be more to the story and is hoping anyone who witnessed the incident or has video showing what happened will come forward.

According to SPS, Regina police will review in-car camera video as part of its investigation.

The incident will also be reviewed internally by the SPS use of force committee.

Foodies, Saskatoon simply could be the Portland of the Prairies

Tastes and smells of ‘Meals Truck Wars’ take over Saskatoon