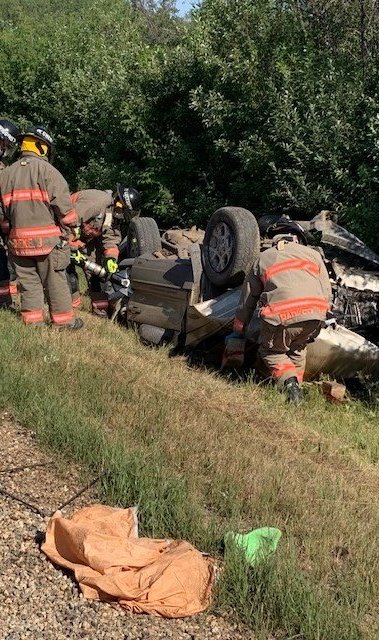 UPDATE: Warman RCMP said Monday that initial investigation has determined an eastbound vehicle on Valley Road left the roadway and rolled. The lone driver, a 44-year-old Saskatoon man, was declared dead on scene. The original story continued below.

One person is dead after a vehicle rolled over on a road southwest of Saskatoon.

The Saskatoon Fire Department (SFD) received a call close to 4:45 p.m. on Saturday that a vehicle was lying on its roof to the side of Valley Road.

A media release, sent out on Sunday morning, stated “extrication was performed using cutting tools and spreaders,” by fire crews. The release said an ambulance and Saskatchewan RCMP were also at the scene.

A fire battalion chief couldn’t say when the person died but told Global News firefighters were only on scene for about an hour.

The chief said he couldn’t comment on the cause or provide any details about the identity of the person. He says he believes only one person was in the vehicle.

The release said the SFD turned control of the scene over to RCMP after extraction.

Medavie Health Services West and RCMP did not immediately respond to requests for comment.