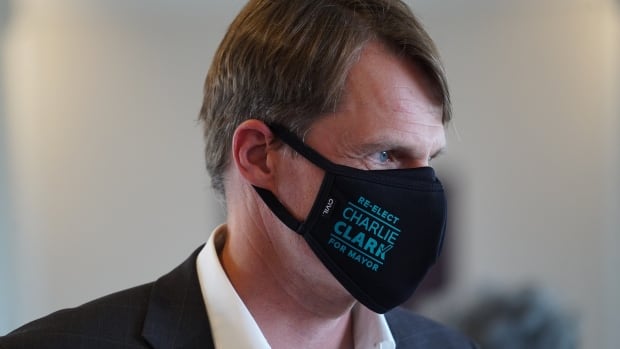 As Saskatoon’s COVID-19 numbers rise, the city’s mayor says there are no plans to deviate from the plan set out by the province.

On Monday, there were 859 known active cases of COVID-19 in Saskatoon, placing the city well ahead of every other region in the province.

At a city committee meeting on Monday, Coun. Bev Dubois said people living in her ward are worried about the mounting cases and are asking whether the city should be implementing its own rules to slow the spread.

“Every day I get a phone call or emails, and I am asked, ‘What more can the city do for the pandemic? Can we override what the province is saying or doing?'”

Mayor Charlie Clark was hesitant to diverge from the official provincial plan.

“When Regina tried to do measures over and above the province at the beginning of this pandemic, it ended pretty quickly.”

City manager Jeff Jorgenson agreed, saying the city does not have medical personnel on staff and doesn’t have the expertise needed to make those calls.

“From both a legal perspective and an expertise perspective, the province is really in the best position to make decisions regarding the pandemic,” he said.

Clark said COVID-19 continues to be a major focus for himself and for city workers.

“It’s a priority for me to really be engaging with leaders throughout our community, as well as the provincial and federal governments,” he said.

“We’re the largest city in Saskatchewan, we’re a hub city where many people are coming and going for services, and we’re also the city with the highest number of cases.”

Clark said he continues to meet with provincial officials to get up-to-date information.

Council voted unanimously in favour of a report that clearly outlines the specific roles the city and province play when putting new measures in place.

The city manager said many workers continue to work from home, when possible.

While there have been cases of COVID-19 in city staff, Jorgenson said all cases were believed to be from community transmission and not the workplace.

What’s yours? CBC Saskatchewan wants to hear how the COVID-19 pandemic has impacted you. Share your story with our online questionnaire.