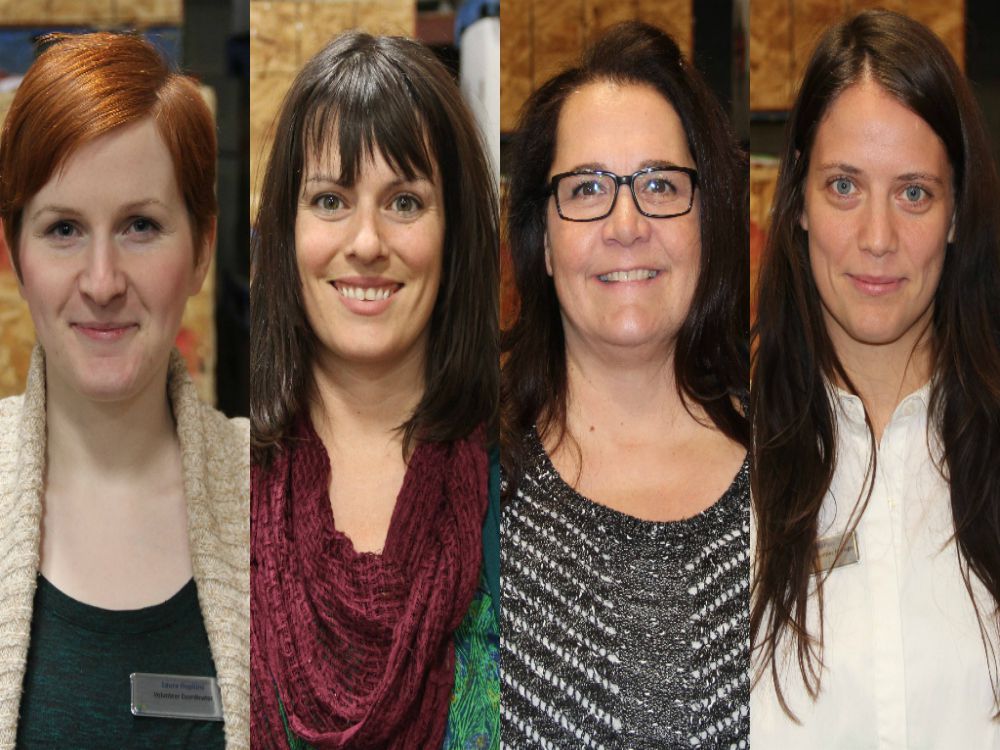 Like the food hampers that work their way onto the tables of those in need of a good meal, the food banks programs also expand outside of the its headquarters in Saskatoon’s Riversdale neighbourhood.

W hen Jasna Matlak arrived, she was a stranger in a new country.

Matlak came to Canada from Serbia last April, seeking a better life for herself and her daughter. She started that journey at the Saskatoon Food Bank and Learning Centre.

Speaking very little English, Matlak enrolled in the Creating Opportunities program, where staff quickly recognized her work ethic. After one month, she was offered an interview for a position at the food bank, a place she has learned to love.

Although she has been learning a lot about her new role, she’s also learning what it means to be part of the community.

“I met different people, I learned about Canada, Canadian culture and the history,” she said, noting she didn’t have much contact with Canadians before, but now, she works with them as they start their own journey to a better life.

Working in client services, she was taken aback at how many people in Saskatoon need assistance, she said.

“I was surprised when I see new clients every day. It is new for me, because I think before (that) in Saskatoon and Canada, we don’t have many poor people.”

It feels good to help others, she said, “Especially when I see older people or pregnant women — I want to help them.

Jasna Matlak came to Canada from Serbia seeking a better life for herself and her daughter. Starting out as a participant in the food bank’s Creating Opportunities program, she’s since become a staff member at the organization, helping others in her role as a client services worker. She credits the Saskatoon Food Bank and Learning Centre for her strong start as a new Canadian. Photo by Morgan Modjeski/The Saskatoon StarPhoenix

According to the Food Bank and Learning Centre’s 2015 annual report, 70,678 food hampers were distributed to families in the city this year.

Although emergency food services are still a large part of how the centre supports the public, staff like Jayne Walters, the Creating Opportunities manager, say that service is only a one aspect of how the organization tries to give people a hand up.

“We want to recognize that when people are living in systemic poverty, they face multiple challenges, and those challenges are wide-ranging,” she said, noting they can range from affordable childcare and housing to substance abuse and domestic abuse.

“Those challenges create significant barriers when it comes to employment,” she said.

“If we can help people fix some of those challenges or detangle some of those issues while they’re here with us and also train them and give them the hard skills — like the resumes and the cover letters and all of that stuff — then hopefully they’re better able to go and find employment at the end of it.”

Entering into its fourth year as it exists today, the Creating Opportunities program provides support that encompasses everything from connecting participants with potential job leads to one-on-one support throughout the six-month program.

“It’s amazing to see the change in people,” she said. “People come here because they’re overwhelmed, but they want to make a change and they’re ready to make that shift.”

While the program provides valuable skills for employment outside of the food bank, volunteer coordinator Laura Hopkins said those who have offered their time to the organization are getting experience and working to make Saskatoon a better city.

“They can see, right in the warehouse, that the work they do very much contributes to the services that we provide,” she said, noting the fact so many people are willing to give up their time for free is more than moving.

“It’s a really great feeling,” she said. “Part of our mandate and our philosophy here is around being not only a resource for the community but to be part of the fabric of the community.”

Hopkins said the number of volunteers that come through the Food Bank can be quite flexible, varying on a weekly and monthly basis, but she hopes the volunteer base grows as the needs of the organization change and mature. With more than 1,500 volunteer hours logged each month, she is confident it will continue.

O ne of the “diehard” volunteers who has been working at the food bank for more years than he can recall is Calvin Carr.

“I just walked in and asked if they needed the help,” he said.

One of the first times Carr encountered the food bank was a time in his life when he was close to living on the street and needed help.

“When I was down and out (and) I needed help, I knew I could come in the front door and get a hamper that would help me out, and I think that’s what really got me to start being a volunteer,” he said.

Working several volunteer positions in the city, he tries to spread the message that it’s all right to reach out for assistance.

“Drop your pride. If you need help, come and get it; don’t make yourself go hungry,” he says.

Working with many of types of people at the food bank has helped him control his anger, keep cool and help others learn the ropes.

“To me, I noticed that a lot of them are learning a lot more than they would — not being rude — sitting in a classroom.”

A longtime volunteer at the Saskatoon Food Bank and Learning Centre, Calvin Carr says the food bank helped him when he needed it, noting if not for the organization, he may have been forced onto the streets. Now, he volunteers and works to help others. Photo by Morgan Modjeski/The Saskatoon StarPhoenix

Like the food hampers that work their way into the homes of people in need of a good meal, the food bank’s programs also expand outside its headquarters in Saskatoon’s Riversdale neighbourhood. Over the last six years, the organization’s urban agriculture project has turned an empty lot on Third Avenue North into a garden that produced 75,000 pounds of produce over the last four years.

Brit MacDonald, the food bank’s urban agriculture manager, is one of the people leading the charge in local food production and sustainability for the centre.

MacDonald calls the 1.5-acre lot known as the Garden Patch a “living classroom” that serves as a venue for educational programs and fresh food production.

For MacDonald, it’s not just about the fresh food. It’s important for all members of the community to learn about where food comes from, she said.

“What we’re looking for is a poverty-free community — that’s something we believe in — but also community food security,” she said, noting lack of access to healthy food has long-term ramifications.

“A really important part is immediate access to fresh, nutrient dense food,” she said. “It’s also allowing people to increase their food literacy and their healthy food choices and behaviours.”

MacDonald said while the garden has been producing roughly 20,000 pounds of food annually, the demand is increasing. There’s “no way” the urban garden could provide all of the fresh food the food bank needs to serve its patrons, she noted.

I n the future, the Garden Patch could experience a growth spurt. The food bank is currently examining the feasibility of a community greenhouse to serve as a Food Discovery Centre.

According to a recent report, which was backed financially by the Agriculture Council of Saskatchewan, the centre would include a 6,000 square foot greenhouse, two classrooms, a kitchen, a social enterprise site and three offices, and would require about $3.3 million in capital funding.

If it comes to fruition, the Food Discovery Centre would serve both as an education and revenue resource for the food bank. Parts of the facility could be leased out, but it would also produce an immense amount of food.

Annual food production estimates for the three main crops in the “high production section” of the greenhouse is 12,000 tomatoes, 15,200 cucumbers and 10,900 pounds of lettuce on an annual basis, all of which would be sent back out in food hampers and baskets.

Food bank executive director Laurie O’Connor said in the end, the goal is not to supply people with just a hamper, or a skill-set, but a future. While the demand for its services is rising constantly, staff say the change they see in people makes a tough job a little easier.

“I love it when I hear stories from the instructors, because they’re the people who participants come back to see … and (we hear from them) everything from, ‘Not only did I go back and finish high school, but I’ve now gone on an done a social work degree,’ ” she said.

“Those are the reasons we all keep coming back to work.”