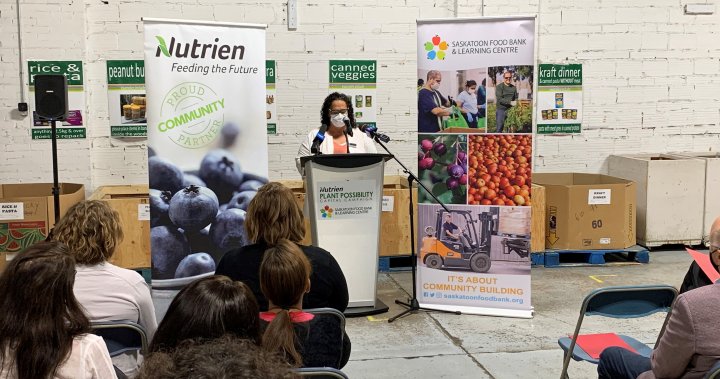 Nutrien announced Monday it has donated $2.5 million to the Saskatoon Food Bank and Learning Centre.

The donation kicks off the organization’s $12-million capital campaign expected to begin in the fall.

Nutrien’s donation makes up 20 per cent of the total goal and went towards a new location for the food bank. The food bank has purchased 425 Avenue P South and plans to open a singular facility with enough space to operate under one roof.

“In our current building we’re bursting at the seems, we have off-site storage for both non-perishable foods and frozen food. Quite frankly we’ve lost a few opportunities for new programming because we just don’t have enough space to provide that,” said Laurie O’Connor, executive director with Saskatoon Food Bank and Learning Centre.

Inflation rates are rising and O’Connor says it has led to more families – and often children – needing support from the food bank.

“In the emergency food bank hamper program, we are now seeing 20,000 people a month” said O’Connor.

Mayor Charlie Clarke says the numbers show a growing problem in the city and a new facility will help meet growing needs.

“For the Food Bank and Learning Centre to have a better system to be able to meet those needs is also really important because then that means that people can have that basic need of food to survive,” Clarke said.

Nutrien has been a long time partner of the Saskatoon Food Bank and Learning Centre. They’ve been working together for ten years and don’t plan to stop anytime soon.

“Food solutions is one of our top priorities where we want to partner … to figure out how do we keep food secure, and a food secure community right here at home,” said Candace Laing, Nutrien’s senior vice-president and chief human resources officer.

Although land has been purchased for the new location of the food bank, construction isn’t expected to start for another two to five years.