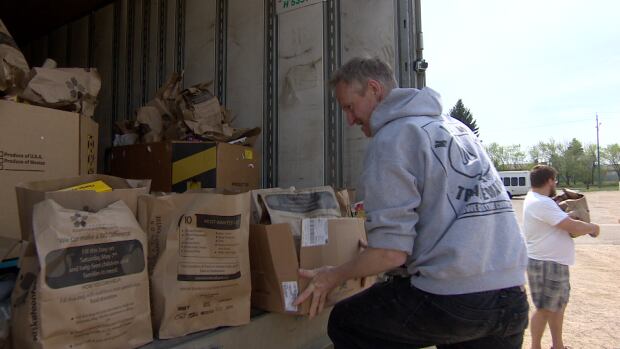 The Saskatoon Food Bank and Learning Centre (SFBLC) is hoping its annual City Wide Food Drive event brings in more than 100,000 pounds of food this year. That’s about 45,000 kilograms.

This year’s target is lofty but necessary, said SFBLC executive director Laurie O’Connor. So far in 2016, more than 20,000 people in Saskatoon are relying upon the food bank per month. Included in that figure are 10,000 children.

That’s an increase of more than 3,000 people using the service each compared to a year ago.

“The economic downturn, the rising cost of food and — of course — rent, transportation [and] childcare. Those things are putting a crunch on people’s budgets,” O’Connor said.

O’Connor said the food bank distributed 75,000 empty bags for the food drive. She said she hopes “every single one of them comes back full” in order to meet the growing demand.

“It’s overwhelming for us to see so many people struggling,” she said. “We’re ever hopeful that there will be some change in the economy.”

People, originally from Saskatchewan, may be out of employment options in Alberta or elsewhere and are returning home home looking for work.

“When you hear these things and they don’t have work, they really do count on the food bank to help them out,” Atchison said.

Even if the SFBLC does reach its goal during the 11th annual food drive, O’Connor said they could still be hard pressed to meet the growing demand.

“That could last us through the summer, or perhaps not,” she said. “It will depend on what the number of people using our services look like.”