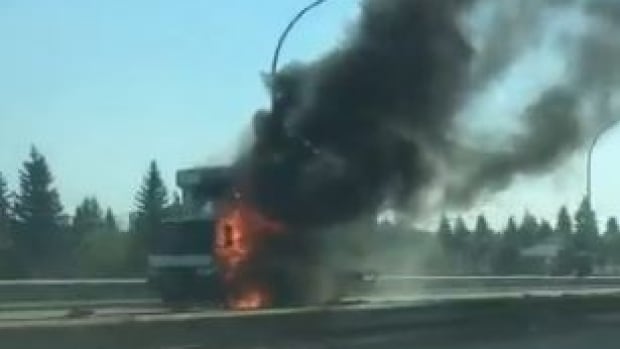 An organization working to provide affordable, healthy food to people in Saskatoon suffered a sizeable blow Tuesday after one of its trucks caught on fire.

On Tuesday afternoon, a refrigerated truck owned by CHEP Good Food Inc. started on fire near the intersection of Circle Drive and Ruth Street.

“My drivers, as they were going down Circle Drive, noticed that there were literally flames coming out the back of the truck,” said executive director Yvonne Hanson

“They jumped out and luckily there was no injuries to either of my staff, but the truck is totalled. The truck is gone.”

Roughly 2,200 kilograms of food that was headed to Saskatoon schools was lost. The drivers were only at the beginning of their weekly food drop-off loop.

“We don’t have cargo insurance. It’s a bit of a financial hit for the organization as well,” said Hanson.

CHEP is now working with partner schools to make sure no students miss a meal.

For years, CHEP has run healthy food programs for schools across the city. It also runs to Good Food Box program, which sells healthy food to consumers at an affordable price.

“If you have an office where everybody’s computer gets hacked and nobody has a computer to work with, and it shuts down operations. that’s the lifeline of that truck to CHEP,” said Hanson.

Fire marshals don’t yet know the cause of the fire and are still investigating.