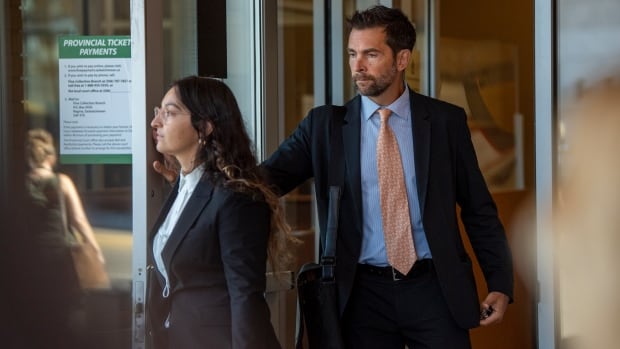 A Saskatoon woman accused of faking her death, abducting her child and fleeing to the United States has been granted bail.

Supporters inside the courtroom at the provincial court in Saskatoon on Friday clapped when they heard the decision released by Judge Lua Gibb.

The accused woman disappeared in late July along with her seven-year-old child. CBC News is not naming the woman due to a publication ban on information that could identify her child.

Details of Friday’s bail hearing, aside from the ruling, cannot be shared due to a publication ban.

As part of the decision, the 48-year-old woman will have to pay $10,000 and must follow strict bail conditions including a curfew and electronic monitoring.

She will be under 24-hour house arrest, with her bail supervisor needing to approve any absences, and can’t leave Saskatchewan unless she has permission from her probation officer.

The woman is facing parental abduction and public mischief charges after allegedly crossing into the United States illegally.

Her truck and other personal belongings were found at Chief Whitecap Park, near the South Saskatchewan River, on July 25.

Police and community members searched extensively for the mother and son. The pair was found safe in Oregon City, Ore., on Aug. 5. She was arrested and the child was brought back to Saskatoon by a legal guardian shortly afterward.

The woman has previously said she was left with “no choice” but to flee the city with her son. She has previously made domestic violence allegations against her ex, the boy’s father.

Saskatoon Police have said the allegations were investigated and no evidence was found to support them.

The woman was transferred into Saskatoon police custody on Aug. 26, after spending weeks in U.S. federal custody and then a brief period in RCMP custody in B.C.

CBC News is not naming the woman due to a publication ban on information that could identify her child.  (Trevor Bothorel/CBC)

The Federation of Sovereign Indigenous Nations (FSIN), a group representing 74 First Nations in Saskatchewan, has called for the woman’s release and an investigation into the police’s handling of her domestic violence allegations.

She will be represented by Marie Henein, one of Canada’s best-known defence lawyers. Henein is known for several high-profile cases, defending people like Michael Bryant, Vice-Admiral Mark Norman and Jian Ghomeshi.

Heinen did not appear on Friday. Local lawyer Chris Murphy acted as her representative.

Along with the charges in Canada, the woman faces charges in the U.S. related to allegedly using false documents to cross the border.

U.S. prosecutors previously said in a request to detain her while waiting for a trial that the woman had been planning to fake her own death well in advance of her disappearance.

Additional charges could be tacked onto her case as the investigation into the events surrounding her disappearance progress, Saskatoon police say.

The woman is scheduled to make her next court appearance on Sept. 19.