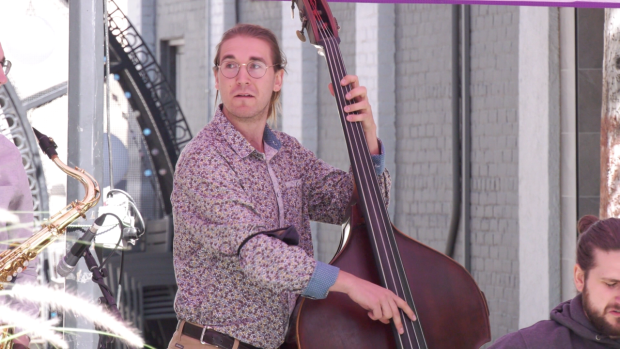 SASKATOON —
The SaskTel Saskatchewan Jazz Festival is into day seven, allowing people to come together and enjoy live music in Saskatoon for the first time since the pandemic hit.

It’s a relief for musicians such as Emmet Fortosky who plays in various local bands including the Prairie Roots Ensemble and Sons of Django.

He had the chance to perform with both bands Thursday as part of Jazz Fest at the Downtown YXE Sidewalk Sale Pocket Park Patio Thursday.

“It’s just amazing to be able to connect with the community more and to be able to see people that want to engage in live music and want to do it in a way that works for them,” he told CTV News.

Fortosky, who is also a music educator, said he spent most of the pandemic learning how to record tracks virtually.

“It’s a surreal experience going from doing a lot of stuff virtually and trying to get everything in isolation. It’s a completely different experience where you actually get to breathe the same air as other people and have that opportunity to exchange ideas both on the stage and through conversations.”

Saskatoon-based alt pop artist velours is marking her biggest live show yet as one of the performers taking to the main stage Thursday.

She said she started releasing original music last year and is looking forward to sharing it with a live audience.

“Most of my music career has been during the pandemic, so it’s really crazy that not only do I get to perform on this amazing, huge stage but I get to finally really express all of my music to a wide audience,” she said.

Kendra Harder, who attended some of the live performances at the Pocket Park Patio Thursday, said it was exciting.

“It’s one of those things that you definitely missed … I’m loving the setup here. There’s been some people dancing, which fills my heart with so much joy.”

Jeremy Gee, who was also there, added, “It’s a little bit scary in a way, right, like seeing people again. But, it’s also really great for musicians being able to play, mixing music for people.”

While Jazz Fest is scaled back this year due to COVID-19, the festival’s artist director, Kevin Tobin, said the turnout and energy has been great so far.

“In addition to the techs working, the Bessborough, the hotel working, people roaming around downtown, seeing friends and family that they may not have seen in a while. That’s what the festival is all about,” he said.

“It’s a community event and celebrating the community, and we couldn’t be happier to be able to do that.”

The Jazz Festival is also giving people who aren’t able or comfortable attending the in-person shows, the option to screen some main stage performances on its Facebook page.

The festival runs until Sunday.