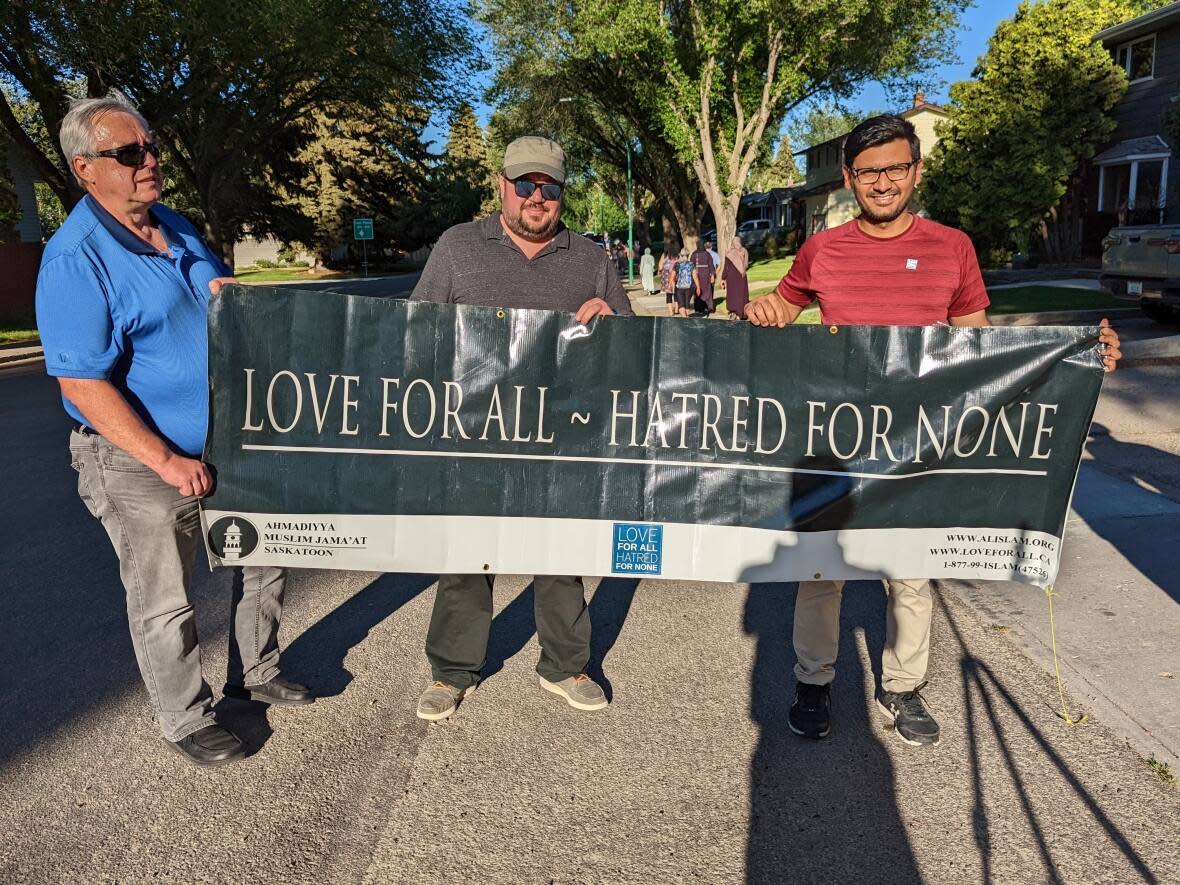 Rashid Ahmed, right, said he and Kim Groff, left, and Abdullah Olewi, middle, brought the sign to share the message of love and to help remove hatred in the community. (Dayne Patterson/CBC News – image credit)

A mass of community members from Saskatoon’s Eastview community and beyond gathered Tuesday evening in James Anderson Park to condemn prejudice in their community.

It’s the second year people have come together after a man was badly injured in what was considered an anti-Muslim assault in June 2021.

Muhammad Kashif  told CBC that he was stabbed and beaten by his assailants while they swore at him and berated him with racial insults.

Then they restrained him and cut off his beard.

“Why you are here? We don’t like you are Muslim, why are you wearing this dress?,” he recalled the assailants saying to him during an interview with CBC later that day.

Earlier that month, four people were killed in London, Ont., in what appeared to be a hate-motivated attack on a Muslim family. Shortly after that, two women wearing hijabs were attacked by a man in St. Albert, Alta., knocking one unconscious and assaulting the other at knife point. 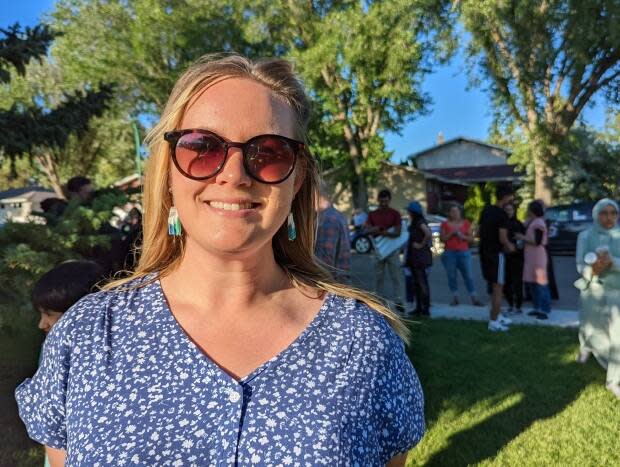 “We definitely want to be an example for other communities. This is an Eastview walk against hate — but it’s a [city-wide] walk against hate,” said Laurel Lindgren, a co-organizer of the event.

While last year’s event was a direct response to the assault against Kashif, this year organizers asked people to commit to broader actions to address racism and prejudice.

“We’re ensuring that people have an accountability piece to their walk so we’re not looking at the walk as one singular action,” she said

For many, those actions (or pledges, as organizers called them) were transcribed in chalk on the sidewalk running through the park.

One read “I pledge to stand up to hate and be kind to all,” while another read, “I pledge to teach my kids to love our differences.” 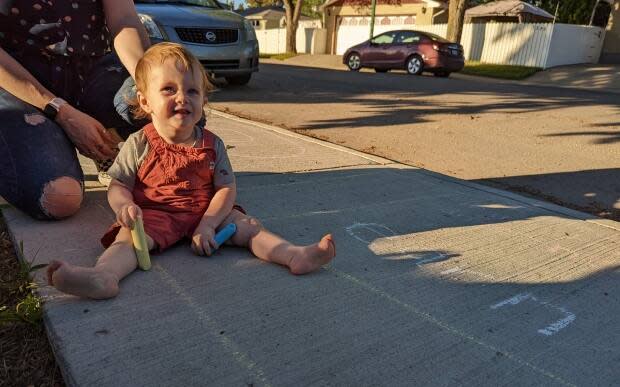 Ruqaiya Dalal, a young attendee, said she came to the event to “stand up against a hateful act.”

“This serious assault is believed to be racially motivated and I decided to join this second annual walk against hate to show that this behaviour is completely unacceptable,” she said.

At the event on Tuesday evening, Kashif said the attack last year still affects him, but he’s heartened by the support from the community.

Fatima Coovadia, one of the event’s organizers, said it’s important that people recognize that hate is still present in Saskatoon’s neighbourhoods.

“We want everyone in Saskatoon to feel safe and included and that they deserve to be here,” she told Leisha Grebinski, host of CBC’s Saskatoon Morning, adding she was “shocked and horrified” when the attack first happened. 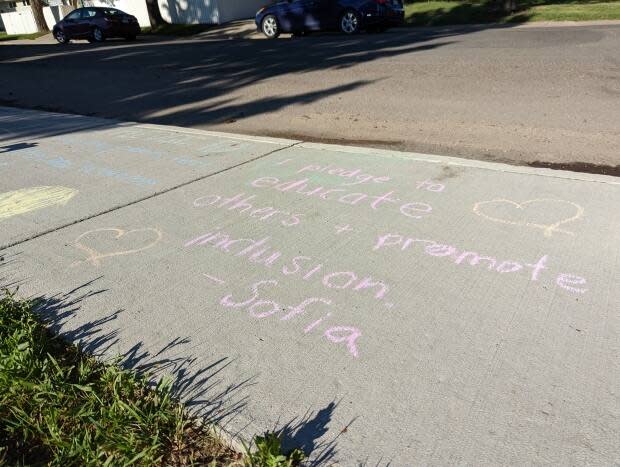 Hate crimes in Saskatchewan have been increasing in recent years according to a Statistics Canada article on police-reported hate crime.

In 2020, the most recent year included in the report, Saskatchewan had the second largest increase in rate of police-reported hate crimes from the year prior—tying with British Columbia with a 60 per cent rise.

When looking specifically at Saskatoon, the city jumped from 10 reported hate crimes in 2019 to a total of 17 in 2020.

Mayor Charlie Clark said he’s heard from many members of the Muslim community, and beyond, who are worried about safety.

He said those concerns are exacerbated by targeted acts, like in Kashif’s case.

“If there isn’t a response in the community that says this is not the way we want to be as a community, then that attack can define a community,” he said.

“But what the organizers of this walk have done is to say ‘No, hate has no place in our neighbourhoods.'”