Saskatoon-raised brother duo discuss facet undertaking aside from The Sheepdogs 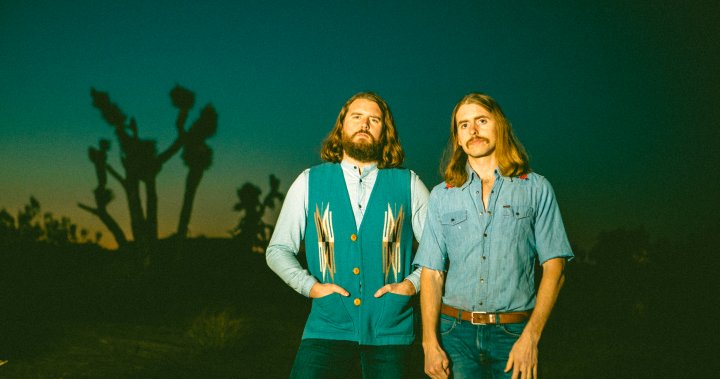 The Saskatoon-raised Currie brothers are using their fraternal bond and playful sense of humour to make music under the banner BROS.

Since 2014, Ewan, 36, and Shamus, 32, have been taking some time away from their main gig — the platinum-selling Canadian band The Sheepdogs — and experiment with multiple music genres as a duo.

“The Sheepdogs has got a very, like, identifiable sound. It’s like a rock and roll band, guitar, bass. And Shamus and I growing up, we always loved all kinds of music … So I think it was just a way for us to delve into some of these other styles,” Ewan said.

“We are not broken up. Both bands exist at the same time.”

“I sort of think of it as BROS being more of a strictly studio project, whereas Sheepdogs are a studio project and live-touring outfit,” Shamus said.

With Shamus joining The Sheepdogs later in the bands’ fame in 2012, the brothers each bring something unique to the recording studio.

“Ewan has a lot more experience playing live with his years with The Sheepdogs before I joined the band. But I have more formal training than he does. I went to music school, I took some music classes at (University of Saskatchewan) but also went to Humber College in Toronto so we have different areas of expertise,” Shamus said.

“It’s very brotherly in a way that we bicker endlessly over issues, but it never goes beyond the end of the studio day. It’s not like these bitter feuds like the Gallagher brothers (of Oasis),” Ewan said.

“It’s like, arguing whether the bass should play this note or this note and then by the end of the day we have a beer and my idea gets chosen so … just joking.”

0:50
What each Sheepdog sibling brings to the BROS side project

What each Sheepdog sibling brings to the BROS side project

In a testament to music running in the family, their father Neil Currie is a pianist who was a composer in residence for the Saskatoon Symphony Orchestra and a lecturer at the University of Saskatchewan.

“(Our father) has this very academic clinical sort of approach to music. And then BROS is one of the ways that Shamus and I always butt heads is that (Shamus’) musically trained and I’m much more from that sort of like playing shows and getting in the van world. And so the instinct versus training really butts heads when the BROS get to making music,” Ewan said.

“I think I inherited sort of a different taste in music from dad than I would from Ewan,” Shamus said.

“You were my son, Shamus,” Ewan said jokingly.

Father, son and brother all came together for the first time when recording the Vol. 2 track Clams Casino.

“It’s a weird little piece of music on the album. It’s like the Mancini-esque like … thing and we knew we wanted some jazz-piano-shredding solos on it and so kind of out of our skill range,” Ewan said.

“When our dad was visiting us out here in Toronto, we went to a studio that had a suitably-old-timey-sounding piano in it and I think we were all a little bit hungover but he sat down and threw down some pretty sweet solos that we ended up using.

“It was really cool. I think he got a kick out of it.”

Although born in Australia, the brothers explained how their Saskatoon roots contributed to their sophomore album, which they described as an “international” record.

“I think it maybe reflects the fact that we were a couple of kids who grew up in Saskatoon but were very sort of intrigued by the world of music … and wondering what there was, Ewan said.

“I have a lot of memories of going down to the library downtown in Saskatoon and taking out 20 CDs at one time.

“They would have a crazy world music selection … that’s very much a product of growing up in Saskatoon and having those things around me. So I think it was a good place to grow up for a couple of curious-minded young guys who were interested in exploring the world via music.”

With some upcoming Sheepdog concerts on the horizon and the release of Vol. 2 slated for July 16, the BROS have no intention of slowing down.

“When we put up (our debut record) Vol. 1, it was obviously hinting that there would be a volume two. I’d love for there to be a volume 10. We’re going to keep it going and The Sheepdogs will keep it going too and I know Shamus has a solo record somewhere hidden away,” Ewan said.

“More music all the time is our motto. I think we’re very lucky to be professional musicians in this day and age so we don’t take it for granted. We want to make music as much as we can and hopefully, people keep listening to it,” Shamus said.

While both live in Toronto now, Ewan said he still cheers for the Saskatchewan Roughriders of the CFL.

“I’m just such a huge Argonauts fan now. Like come on, you kidding me? Riders, all the way!” Ewan said.

“We lived there and grew up there for 20 years … I still think most of my formative years were in Saskatoon,” Shamus said.