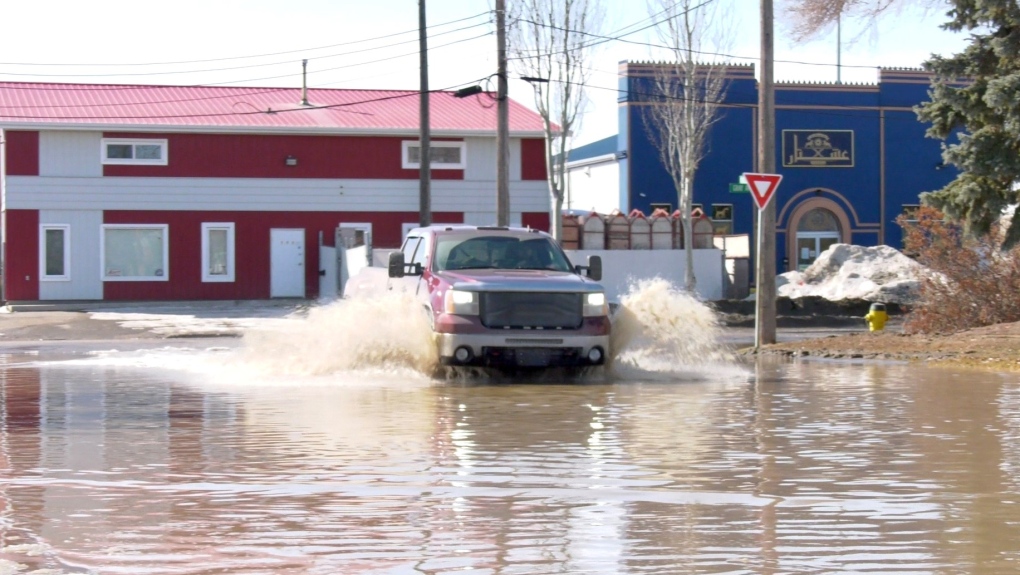 Residents along the intersection of Fitzgerald Street and Gray Avenue in the Sutherland neighborhood are becoming increasingly concerned at the size of a large puddle forming along the street and sidewalk.

Their growing concerns are matching the growing puddle that is beginning to resemble a pond as the annual spring melt continues in Saskatoon.

Geoff Propp says he’s losing some of his property to the puddle.

“I’m trying to go on with a beautiful Saturday here, but come on,” Propp said, pointing to the puddle that’s extending onto his driveway.

“I can’t even walk around the front of my vehicle.”

Propp said he called a city hotline to inform them of the growing puddle five days ago. He was told someone would be in the area within 48 hours, but the puddle has grown significantly since then.

Propp’s concerns heightened after a water main break in the winter partially flooded his basement, and he’s hoping to avoid the same fate for the second time in less than five months.

“It’s dangerous too. I noticed out the front window that a lot of people walking by have to walk right on the (street). They’re yelling at people driving by for splashing them. There’s a few things going on here that the city needs to address,” Propp said.

“We pay good money for taxes. You would think (after) four phone calls they would come and help me.”

In an email to CTV News, the City of Saskatoon said it’s aware of the body of water at Fitzgerald Street and Gray Avenue and some initial help would be on the way during the weekend.

“The intersection of Gray and Fitzgerald is on the list for a boiler truck, unfortunately it keeps get bumped for locations with flooding causing property damage,” a statement from the roadways department said.

The city says a grader will be heading to the area to see if I can help until a boiler can respond.

Derek Holfeld lives along Gray Avenue and hopes the problem can be resolved soon.

“It’s been about five days now since the first phone call, but it doesn’t look like it’s going anywhere anytime soon,” Holdfeld said.

With 14,000 catch basins in Saskatoon, Holfeld can appreciate the project the city is facing during the spring melting season.

However, he fears it can’t go on much longer.

“We don’t travel by canoe, so this is not adequate,” Holfeld said.