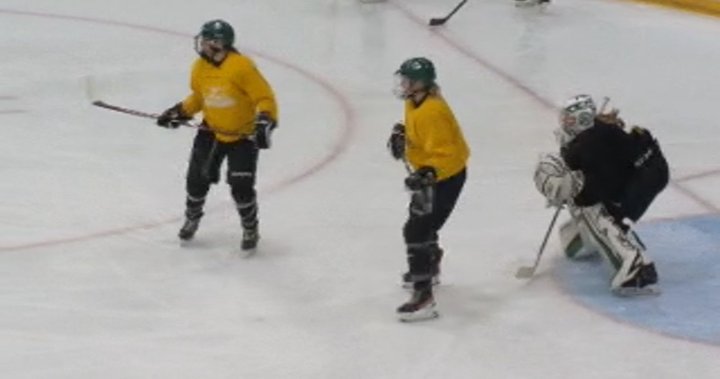 The buzz is back at Merlis Belsher Place.

The Saskatchewan Female Under-18 AAA Hockey League season begins this weekend and after going through a year with almost no meaningful games, the Saskatoon Stars are over the moon with anticipation.

Like most hockey teams, the Stars didn’t get much of a 2020-21 season, playing just two games before the second wave of COVID-19 forced the SFU18AAAHL to suspend play and ultimately cancel the rest of the campaign.

“We were getting ready to get into the games and looking forward to it and then all of a sudden it’s shut down again and we were just having to practice all year,” forward Halle Helperl said.

The Stars tried to make the most of the situation, devoting the extra practice time to skill development, but without the opportunity to compete against other teams, it just wasn’t the same.

“It was mentally challenging to come to the rink every day. We just knew that we had to come just to get better even though we weren’t really playing for anything, we knew that it would come up at least this year so we had to get ready for that,” Helperl said.

But all work and no play wears thin after awhile and with the league starting back up this fall the Stars are overjoyed to be preparing for actual opponents again.

“It’s honestly so exciting. Like I forgot how exciting it is to play games and even in preseason I’m seeing the potential my team has. We’re gonna be pretty good this year, I think,” Helperl said.

Saskatoon Stars settling into their new home at SaskTel Centre

Last season was Keyra Buziak’s first with the Stars. A highly-touted forward who is expected to be a top point producer this season despite being one of the team’s younger players, she’s waited an extra year to show what she can do at the U18 level.

“Especially because there was nothing of a season last year we’re just so excited to get back, and every team has built over the last year that we had and they’ve all gotten stronger and so have we,” she said.

The return of a proper season is not only good for the players’ physical and mental health, it’s also critical for those hoping to catch the eye of college recruiters. Last year, teams were reduced to sending video of players doing individual skill drills to prospective post-secondary programs.

It was better than nothing but still a far cry from being able to showcase their skills in a game environment.

“Since none of (the scouts) had the chance to come watch us last year it’s even that much more pressure to play as hard as we can this year to get noticed,” Buziak said.

Stars head coach Robin Ulrich is proud of what the players were able to accomplish despite the obstacles they faced, but she’s glad they won’t have to go through that again.

“The last two summers they’ve put in and the last year of work, they’ve improved a ton and it’s hard to show that in a skill session so just the ability to play games is so big for them,” she said.

‘All they’re trying to do now is save my leg’: Saskatchewan athlete broken but not beaten

While the long layoff means the Stars are short on game experience, with a roster featuring nine rookies and five other players who were rookies a year ago, they know that their competition is in the same boat.

“There’s going to be a lot of parity (in the league) this year and I think anybody’s gonna beat anybody on any given night if you’re not ready to play and as cliché as that sounds, that makes it really fun,” Ulrich said.

And with the bonds they’ve forged going through such a tumultuous time together, some fun is long overdue.

The Stars open the season with a pair of road games against the Weyburn Gold Wings on Oct. 9 and 10. They welcome the Regina Rebels to Merlis Belsher Place for their home opener on Oct. 16.

Saskatoon Police in search of suspect after alleyway stabbing – Saskatoon