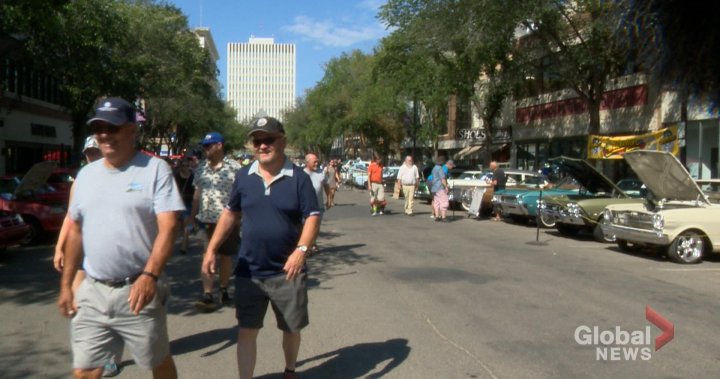 Over 900 cars lined the streets of downtown Saskatoon on Sunday.

They covered over 14 blocks, 1st avenue to 4th avenue and between 20th street and 23rd street.

“This is what we’ve all been waiting for, this is what we’ve put on hold for the past 3 years and now we can go all in and i’m just so excited to have it and give it back to the people of Saskatoon,” said Heather Bonynge, Rock 102 Director of Promotions.

It’s the first Show and Shine since 2019 and over a thousand people came to check out the cars.

“This is our first time back in the downtown core and all of the car clubs that we spoke to leading up, everybody is just so excited that this event is back,” said Bonynge.

One of the beautiful cars on display was a 1992 Chevrolet Camaro RS. The owner was happy to be back.

“It was gifted to me by my brother. He bought it in California and I brought it up to Canada in 2009. I had to pay him one dollar,” said Peter Derrick, show participant.

“We just have some really amazing classic cars as well, so I would say that we’re in a win situation, everythings going way better than we could’ve hoped for,” said Bonynge.

Rock 102’s Show and Shine is completely free for all visitors and goes until 4 p.m.