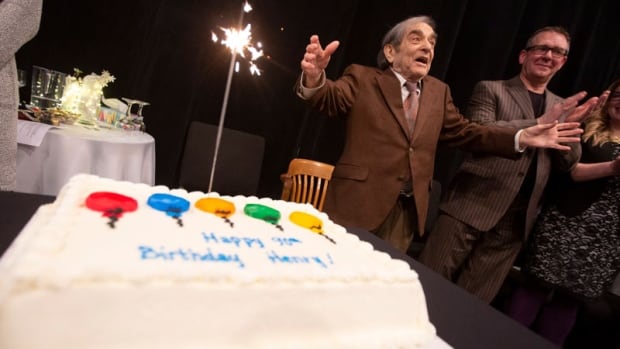 Saskatoon’s theatre community has lost one its most well-known and influential artists.

Henry Woolf was an actor, director, playwright, professor and a recipient of Saskatchewan’s Order of Merit.

The British actor died this week at the age of 91.

“He came and stirred the … theatre pot in Saskatoon in a way that very few people, if any, have ever done before,” said Saskatchewan actor Kent Allen.

“Knowing him and working with him would be an enlightening experience for anyone.”

Woolf and Allen met at Shakespeare on the Saskatchewan, where Woolf was artistic director from 1991 until 2001.

Before moving to Canada, Woolf kicked off his successful career in Britain.

At school in England he met future Nobel Prize winner Harold Pinter, according to the Canadian Theatre Encyclopedia.

The two became lifelong friends and Woolf directed and acted in Pinter’s first play The Room in 1957.

During his time in Britain, Woolf was busy acting in theatre, film and television.

His screen credits include The Rocky Horror Picture Show as well as Doctor Who, while rubbing shoulders with famous artists such as Sir Lawrence Olivier or Orson Welles, according to the University of Saskatchewan.

“He was a man of the theatre in the complete sense of the word,” said Allen.

“He was generous, creative, inspirational, all of those things to a lot of students.”

Teaching the next generation of actors

“He was an idol to so many of us here, and he had this whole other career in England,” said Kristi Friday, a theatre actor and puppeteer from Saskatoon.

She was a student at the department of drama during Woolf’s time at the university.

“There was never an air about him of better-than. He was always there and talked on the level of others, always very humorous and encouraging.”

He inspired and encouraged several generations of actors, said Friday, both as a professor and later head of the department of drama as well as during his time as artistic director and founding member of Shakespeare on the Saskatchewan.

“He got the community, both the public and the artistic community, excited about doing Shakespeare.”

Woolf was very hands-on as a director at the festival, according to Allen, and full of energy.

“A man who was endless in the creative spirit,” said Allen. “It was marvelous to work with him.”

Over the years, Woolf collected several distinctions in Saskatchewan.

The Saskatoon and Area Theatre Awards dedicated one of their awards to the British actor — the Henry Woolf Continuing Achievement Award.

In 2020, on Woolf’s 90th birthday, the University of Saskatchewan’s department of drama named one of its studios after Woolf.

Artists in Saskatchewan who knew him, though, will remember Woolf especially for his kindness, according to Friday and Brandon.

Both received little notes or friendly messages from their mentor as young actors, even if he was not their director at that time.

“I can remember after a production of Julius Caesar that we did in the Refinery, I came home and he had already called and left a message to commend me on the work,” said Brandon.

Another time Brandon found a note on his dressing room mirror.

“I keep those little notes and things like that, and I know I’m not the only one he did that for.”

Ever after his retirement from teaching and directing, Woolf remained dedicated to theatre.

Despite his death, Woolf’s legacy in Saskatoon will live on, said Allen.

“People like Henry don’t come along very often,” he said.

“The chances are you will never meet another Henry Woolf in your life.”

You’ll be able to nonetheless absorb on-line alternatives: 5 issues to do that weekend in Saskatoon

Saskatoon police use Taser whereas responding to disturbance at RV park