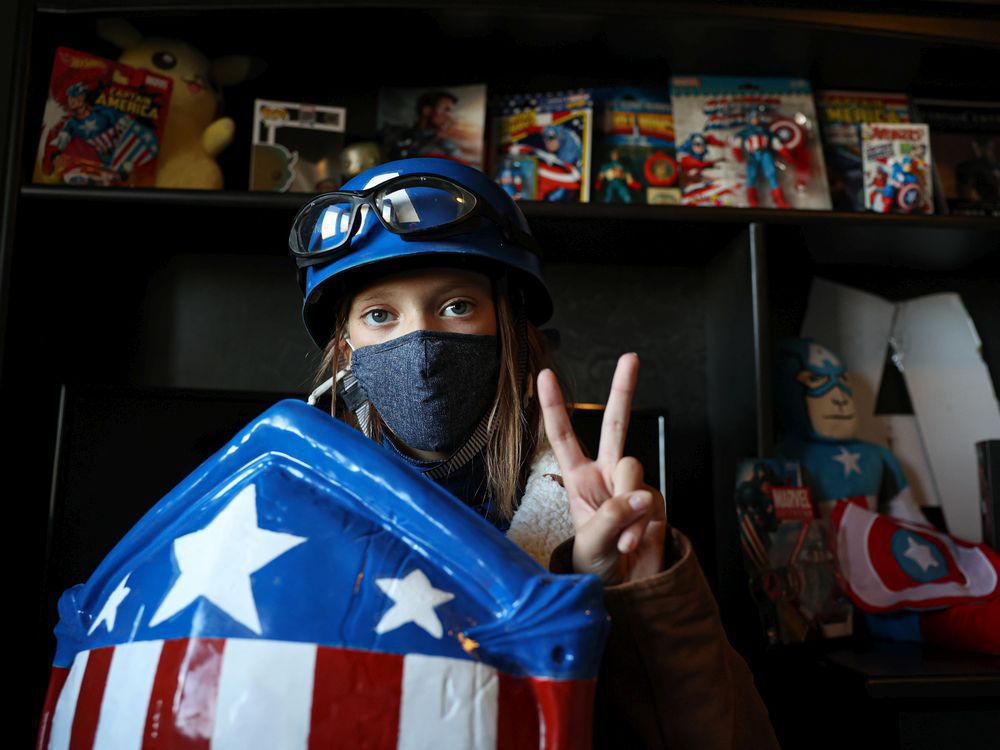 Saskatoon has a new superhero leading the charge for vaccinations.

10-year-old Morgan Salter spent months making her Captain America costume, hoping to wear it at her first comic expo. It was cancelled due to COVID-19, so she’s decided to use the costume for a campaign called “V is for vaccination, V is for Victory” instead. Photo by Michelle Berg /Saskatoon StarPhoenix

Saskatoon has a new superhero leading the charge for vaccinations.

Up until a couple weeks ago, Morgan MacFarlane was an unassuming 10-year-old girl who loved Captain America and comics. She was getting ready for a comic expo in Edmonton the first weekend in October.

“He used to be tiny and now he’s tall and he’s a good person,” said Morgan. “(Heroes) are cool because they save the world.”

Then, like most superheroes, Morgan’s origin story took a turn for the worse. There was a snag. The expo was cancelled because of COVID-19.

10-year-old Morgan MacFarlane spent months making her Captain America costume which she was hoping to wear at her fist comic expo. The expo was cancelled due to COVID-19, so she’s decided to use the costume for a campaign called “V is for vaccination, V is for victory” instead. Photo by Michelle Berg /Saskatoon StarPhoenix

But then her stepdad had an idea: “Let’s do something that can help people and get things back to normal quicker, give you a chance to wear the costume more. Captain America doesn’t just fight bad guys. He’s a leader. He inspires people.”

That’s where the campaign — “V is for vaccination, V is for victory” — was hatched.

“It’s taking a negative situation and making it positive. She’s a very passionate kid. She’s passionate in her sports. So we knew she would take this on,” Julie said.

Morgan dresses up in her costume and takes photos with people, making a “V” sign with her fingers, and encourages people to get vaccinated if they can.

“Kids my age can’t get vaccinated, but I’m trying to encourage adults to because adults are around us. We have to make sure they’re vaccinated,” she said.

The next thing she knew, she was meeting Saskatoon Mayor Charlie Clark.

“And then he just came out and took pictures with me and I was scared,” she recalled. “He said ‘It’s a really great thing you’re doing and we need more people out there doing this.’ ”

That made her feel good and encouraged her to keep going, she said.

“I was just so impressed that Morgan has taken this initiative as a 10-year-old girl in our community, to really get the word out about how important vaccination is, and to do it in such a creative and fun way, drawing on the spirit of Captain America to do it,” he said.

“And she’s taken such initiative to go out and meet so many people. It’s just awesome and it’s just the right message we need right now in Saskatoon.”

Morgan then met with Dr. Hassan Masri, an outspoken leader in the city’s medical community.

Since then, she has been photographed with police and fire crews, and received a video acknowledgement from the president of the Canadian Medical Association.

“The campaign that she’s doing is very much like a wartime effort campaign. The flamboyant posters, ‘We can do this.’ It kind of fit all together with the costume. Because we really are in a war right now, I think,” Boyd said.

“You couldn’t write down how proud I am of her.”

Boyd, who is originally from the United States, said he hopes Morgan’s crusade also has an impact on friends and family there, and convinces more people to get vaccinated.

“We’re hoping it inspires others to join this fight, and she has said, ‘I’d really love it if an adult listens and goes and gets it done,’ ” Julie said.

Morgan has a message for other kids who might have had disappointments during the pandemic: “Sometimes being disappointed helps you and pumps you up to do better things. So don’t give up on it.”

She wants to be first in line to get a vaccine when she becomes eligible, she said.

Ten-year-old Morgan MacFarlane meets with frontline workers for her “V is for Vaccination” campaign. Source: Facebook

Get artful: 5 issues to do that weekend in Saskatoon