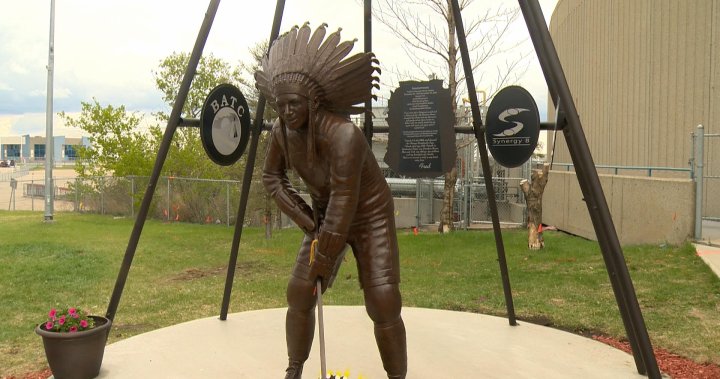 A statue honouring one of the first Indigenous players in the NHL, Fred Sasakamoose was unveiled in Saskatoon on Wednesday.

May 18 has been officially proclaimed a day to honour his legacy.

Sasakamoose was an elder from Ahtahkakoop Cree Nation and played for the Chicago Blackhawks during the 1953-54 NHL season.

Family celebrates his legacy on anniversary of Fred Sasakamoose’s death

Sasakamoose died at age 86 in November 2020 in Prince Albert, Sask., due to complications from COVID-19.

Sasakamoose dedicated his life to encouraging youth through sport and is being remembered as someone who helped break the racial barrier for Indigenous hockey players in the NHL.

He served on the NHL’s Ethnic Diversity Task Force following his retirement from competitive hockey in 1961.

“Our father was born a free child amongst the First Nations customs and culture and suffered the horrors of residential school at an early age,” said Sasakamoose’s son, Neil.

“He then went on to become the Most Valuable Player in the Western Canadian Junior Hockey League and to see the bright lights of the National Hockey League. He leaves a legacy of understanding and love for all nations to follow.”

The statue stands at the main entrance of the SaskTel Centre.

It was commissioned by the Synergy 8 Community Builders and partnered with Saskatoon Tribal Council and the Battlefords Agency Tribal Chiefs.

A release stated renowned artist Don Begg of Studio West Bronze Foundry in Alberta “was inspired by Fred’s likeness as a young man that always had a smile for people he would meet.”

Troy Davies of Synergy 8 Community Builders said it is important for future generations to be aware of Indigenous history.

“We feel it is important that Fred’s legacy in the City of Saskatoon and Saskatchewan be recognized,” said Davies.

Sasakamoose was also recognized for his achievements and contributions by the Assembly of First Nations (AFN) and the Federation of Sovereign Indigenous Nations (FSIN).

The tournament features First Nations, Métis and Inuit men’s and women’s hockey teams from across Canada.