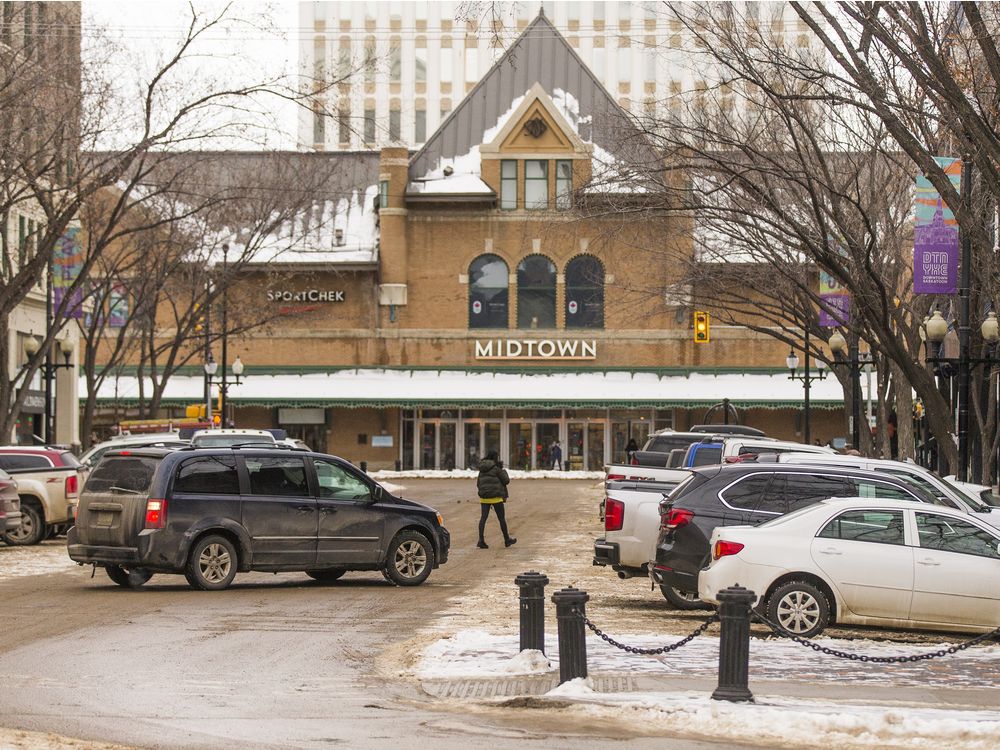 The Saskatoon region grew by nearly two per cent in 2020, but also ended the year with 5,000 fewer people employed than a year earlier.

Midtown Plaza in downtown Saskatoon is seen in this photo taken in Saskatoon, SK on Tuesday, December 1, 2020. Photo by Matt Smith /Saskatoon StarPhoenix

According to the most recent estimates by Statistics Canada from last year, the Saskatoon region grew by nearly two per cent over 2019, tied with Calgary and just ahead of Edmonton.

By comparison, the Regina region grew by just shy of one per cent and the Winnipeg area’s growth rate was lower than Regina’s. Nationally, metropolitan areas grew by 1.3 per cent.

As of July, Statistics Canada says there were 336,614 people living in the Saskatoon region, which includes the cities of Warman and Martensville, as well as some smaller communities.

The Saskatoon region ranks as the 17th largest such urban area in Canada, having grown by an estimated 14 per cent since the last census in 2016. That growth rate over that period is beaten by just two communities with 100,000 people or more: Kelowna, B.C., and Chilliwack, B.C.

Regina grew by 11.3 per cent, more than the three largest Prairie cities: Calgary, Edmonton and Winnipeg.

Nobody expected the Saskatoon region to keep up its torrid growth pace in the face of the COVID-19 pandemic, but a two per cent growth rate during these times still rates as encouraging.

But the same factors that make Saskatoon and the region around it an attractive place to live also make it susceptible to the most challenging effects of the pandemic.

The Saskatoon region ended a COVID-19-ravaged 2020 with an unemployment rate of 8.1 per cent, higher than the provincial rate of unemployment (seven per cent) and the rate in Regina (6.3 per cent).

A year ago, the Saskatoon region boasted an unemployment rate of 5.7 per cent, lower than both the province as a whole and that of the Regina region.

The unemployment rate more than doubled in June to 14.1 per cent before dropping.

Unemployment rates can be deceptive, though, because they do not include those who have stopped looking for work, as we know many have done during the pandemic. Women, in particular, may have ceased looking for work to focus on child care.

So there’s more people in the Saskatoon region, but there’s also more people looking for help.

Unfortunately, the recent list of COVID-19 outbreaks in Saskatoon includes some of the most essential services for people during tough economic times.

The Saskatoon Food Bank and Learning Centre is experiencing its second outbreak. Outbreaks have also been declared at the Friendship Inn and at the Salvation Army Crossroads halfway house.

As expected for the largest urban centre in the province, the Saskatoon zone used by the province to share information about COVID-19 has also led in several categories.

The Saskatoon zone leads the province in both testing and total cases diagnosed. As of Tuesday, 6,244 COVID-19 cases have been recorded in this zone, about 26 per cent of the 24,236 total cases. That’s slightly lower than the region’s share of Saskatchewan’s population, about 28.5 per cent.

The Saskatoon zone also leads in testing with 142,338 tests performed, about 27.8 per cent of all tests conducted in Saskatchewan, which continues to badly trail the national testing rate.

Nearly a third of the total cases in the Saskatoon region, 2,033, were diagnosed so far in 2021, when the test positivity rate rose to a concerning 9.6 per cent.

The province’s most populous zone has led in active cases mostly since the fall, peaking at 1,538 on Dec. 7 and peaking post-Christmas at 921 before dropping to 555 on Tuesday.

Active cases first peaked in the Saskatoon zone at 100 on April 7, which was concerning at the time.

The Saskatoon zone may now be leaving the worst stretch of the pandemic, but total recovery remains at an uncertain point in the future.