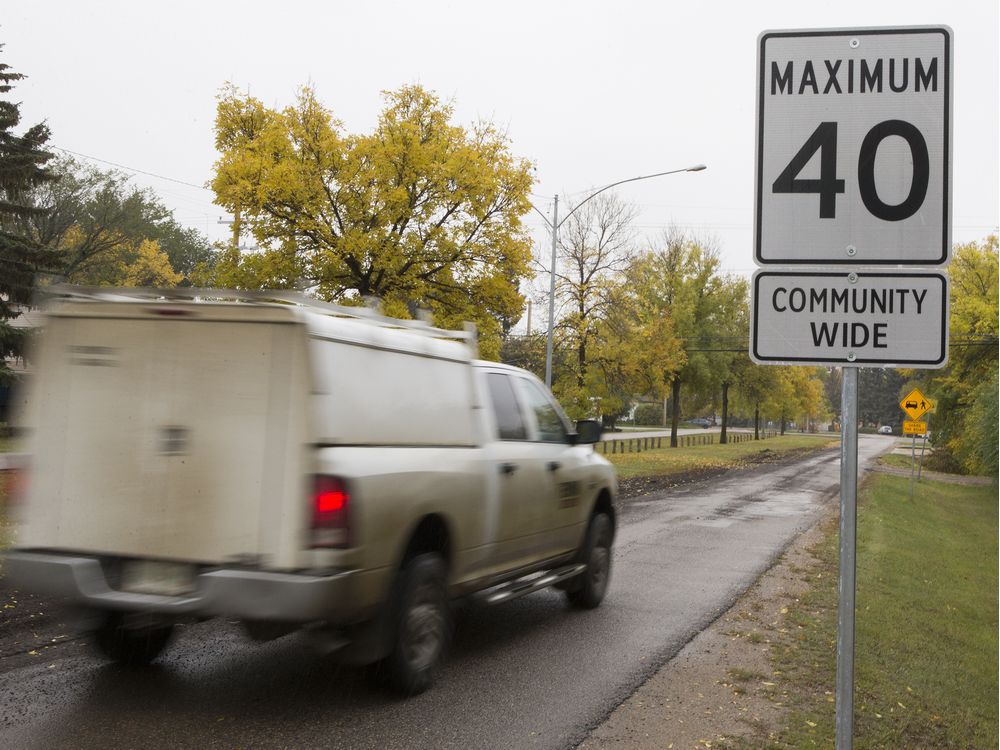 The city lowered the speed limit to 40 km/h in the Montgomery Place neighbourhood in 2016 because of the absence of sidewalks throughout most of the community in Saskatoon, Sk on Friday, September 21, 2018. Photo by Kayle Neis /Saskatoon StarPhoenix

The City of Saskatoon boasts about improving consultation with residents, but all it’s really getting better at is ignoring people.

A report from city hall administration recommends lowering the speed limit on residential streets and on so-called “collector” streets to 40 kilometres per hour.

It also omits any information about collisions, which declined despite a growing population between 2015 and 2019.

So how did the city administration make this decision? According to the report, the recommendation was made “based on a balanced approach between quantitative and community values criteria.”

The decision is touted as “consistent” with similar moves by Calgary and Edmonton, but the Saskatoon proposal goes further to add collector streets to the mix.

That means speed limits would be slashed on most streets in the city, including collectors like Victoria Avenue and Centennial Drive.

Even Mayor Charlie Clark — long an advocate of lower speed limits on residential streets, who failed twice as a councillor to advance this cause — said he was “quite surprised” by the inclusion of collector streets.

Perhaps collectors are included simply to give council a chance to defeat that idea and soften the blow of approving a drop in speed limits on residential streets that so clearly flies in the face of public opinion.

The report is mostly buried in bureaucratic language, but it utterly fails to explain why this is the right approach for Saskatoon.

That’s likely because the question of why a drop in speed limits is needed in a city where collisions are declining has proven impossible to answer, even for bureaucrats who are used to trying to redefine reality.

But there’s absolutely no reason residents can’t ask that same question of the politicians who represent them.

The move to lower speed limits is predicated on safety, in this city and others. Yet in Saskatoon, at least if you actually look at the statistics, the streets are already becoming safer.

What’s more important is that most of these collisions did not happen on either local or collector streets. Just over half of crashes occurred on arterial streets that would not be affected by the proposed speed limit reduction.

Seventeen per cent happened on local streets and 14 per cent on collector streets — less than a third of collisions combined.

If you look at the percentage of crashes that resulted in severe injuries, that number shrinks to 23 per cent on local and collector roads and drops slightly more for fatal collisions. And not all of these collisions resulted from speed.

So if safety is really the driving force behind this, it seems ridiculous to exclude the streets where the most collisions, and the most dangerous collisions, are happening.

Lower speed limits on residential and collector streets could compel more motorists to use the more dangerous streets.

The cost of replacing signage for this move is estimated at about $1 million, and the report does not mention the future of other “traffic calming” infrastructure.

The report acknowledges the reasons behind the recommendation include the “perception of safety.” That’s evidently among the community values.

Apparently, those community values do not include listening to residents, even when you asked for their opinion.

Those voices are being dismissed by the bureaucrats whose salaries are paid through their rapidly rising property taxes.

Should city council decide to move forward with lower speed limits — a decision is expected in September — you can bet this marks the last time many people will take part in a Saskatoon city hall survey.

Perhaps that’s the point. People’s opinions and relevant statistics simply get in the way when a decision’s already been made.

Saskatoon housing costs spike throughout first half of the yr