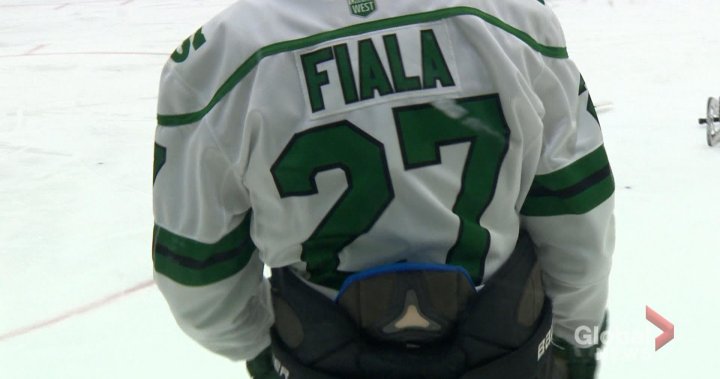 Like most hockey playing siblings found anywhere across Saskatchewan, the Fiala siblings’ roots on ice start at the outdoor rink, where they first learned to skate, shoot and compete.

It’s something that the three of them, Evan, Joelle and Jocelyn, still remember fondly as they continue to play professional hockey.

“In my family we’re Montreal Canadiens fans, so we’d be ripping on the ice in our Habs jerseys. It was always so fun,” youngest sibling and Saskatoon Stars defenceman Jocelyn explained.

Regardless of the fun hours they experienced during those skates in their hometown of Clavet, the rink has always been a fast-paced, competitive environment for the Fialas, something that’s helped all three reach a high level of hockey.

“For the random people that we meet on the ODR (outdoor rink), they’re either scared to come by, or it’s an absolute blast,” brother and Saskatchewan Huskies defenceman Evan chuckled.

“The Fialas are always going to be going 100 miles an hour.”

“If you’re going to come on the ODR with us it’s kind of expected,” sister and UBC Thunderbirds forward Joelle added. “Maybe we could take it down a notch, but that’s not really how we roll. The compete level between all of us is insane.”

Evan was the first of his siblings to play AAA hockey, major junior and eventually collegiately, but even so he doesn’t take credit for being the sibling to encourage the rest of the Fialas to get into hockey. That honour goes to oldest sister Jordan, although she never pursued the sport to the same levels as her younger siblings.

But, even though Evan was the trailblazer at the competitive level, he’s quick to compliment and promote his younger sister’s achievements, even if that proud smile is nowhere to be found when the three compete on the outdoor rink.

“Every sibling seems to be better than the next,” he proudly explained. “Joelle has done really well having an amazing time at UBC and Jocelyn, believe it or not, is better than the both of us.”

While his sisters are quick to credit him for his heavy shot and competitive edge, there is one thing the three of them can always agree on: the affinity with the number 7.

At higher levels of competition the number became scarce, so the shift has now come to the number 27, a trend Joelle started while with the Stars.

“27 was just a number that was available when I made the Stars, it had the number 7 in it, so I jumped at it,” she explained.

From there she went to convincing her two siblings that 27 was the number to choose for the Fialas going forward, beginning with Evan when he joined the U of S Huskies.

“Joelle was the first one to blaze the trail wearing 27 with the Stars,” Evan said. “Then when I came along to the U of S I had the option of 7 or 27 and (former head coach Dave) Adolph gave me number 27 and now here comes (Jocelyn) with the same option. I guess it’s just been lucky for us.”

“I don’t know if I intimidated (Jocelyn) or scared her into taking 27 with the Stars, but I’m glad she has it now,” Joelle chuckled.

“I think we all look pretty good in (27),” Jocelyn said. “But growing up watching my sister play I always wanted to play like her and I’m happy to wear her old number.”

An interesting wrinkle that the siblings only noticed last summer that further ties in with their affinity to the number 27, the first mileage sign between their home town Clavet and Saskatoon reads ‘Saskatoon 27km.’