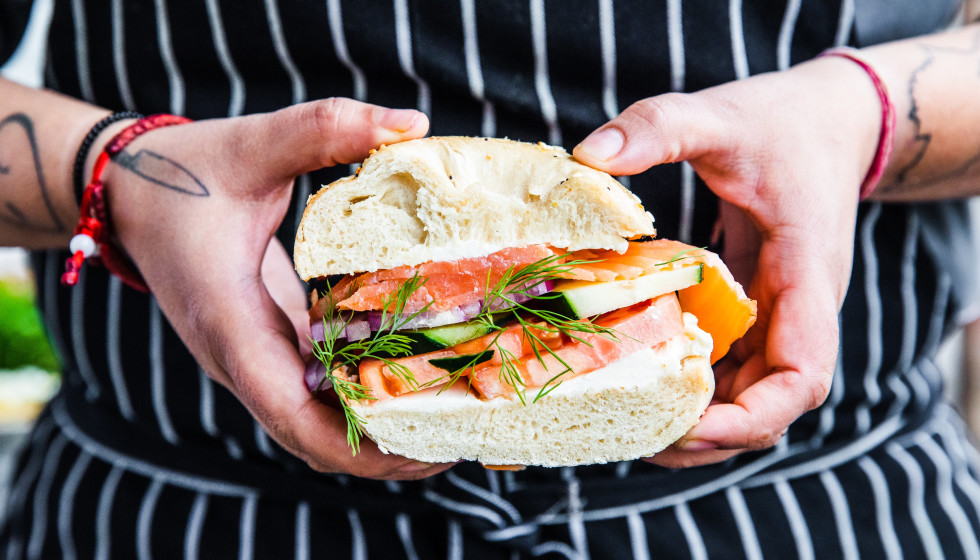 Saskatoon’s newest bagel shop opens this week. The Bagel Shop Bakery, a sister location of the 45-year-old Meyerland-Original, will start its service on Wednesday, December 30th.

The new Bagel Shop Bakery is located in a former pawn shop / drug store at 5422 Bellaire Blvd. and is one of three concepts that manager Michael Saghian opens up in this room. Saskatoon Catering Concepts is already operating on the premises, while a second location from the bakery-companion New York Deli and Coffee Shop, both of which are jointly owned by Saghian, will debut in late spring / early summer 2021.

While Saghian goes to great lengths to emphasize that nothing will change the original location of the bagel shop, the new outpost offers a vastly different experience. For the first time, guests will have the opportunity to buy bagel sandwiches and other prepared products that can be consumed to take away or on a 40-seat terrace.

“The biggest thing for us is that the bagel shop has been around for 45 years,” Saghian told CultureMap. “We want to take the warmth and the memories and the meaning behind us and open up this place with all that, but offer upscale sandwiches to give part of our community the opportunity to eat our bagels and bring in the old and the old, new and continue to build on cross-generational families. “

To help make that vision a reality, the bagel store turned to consulting chefs Matt Marcus and Roshni Gurnani, a chopped champion who will also serve as the deli chef when it opens later this year. The duo took inspiration from both Marcus’ time in the original location and modern Jewish concepts such as New York restaurants Russ & Daughters and Sadelle’s, creating a fully kosher selection of dairy and pareve dishes (neither milk nor meat), that meet the requirements of the ultra-strict standards of the Mehadrin Kashrus of Texas (better known as MKT).

Compliance with this standard, which is in line with the nutritional practices observed by ultra-Orthodox Jews, involves a whole range of procedures to be followed and products to be used. For example, all ingredients must be checked in via video chat with one of the supervising rabbis. In addition, the cream cheese used in made sandwiches is from a MKT-approved manufacturer and is different from the cream cheese that the retail bagel store makes and sells.

For those who either don’t stay kosher, the most practical manifestation of adhering to these rules is that the bagel shop doesn’t sell meat products. This means that Marcus and Gurnani had to get creative to come up with non-meat-based versions of classic sandwiches and starters like matzo ball soup.

“We take the traditional Jewish recipes and can offer them in a vegan environment. It elevates the menu, offers salmon and bagels, and makes it a wow factor, ”says Gurnani.

In addition to bagels and salmon, the menu includes a breakfast sandwich with fried eggs, cheddar cheese and vegetables. Avocado toast is provided and is used with a pizza bagel that can be topped with cheese or vegetables. More creative options include a homemade falafel burger, pastrami and salmon reuben sandwich, and latkes with smoked salmon. Both milk and pareve desserts are offered, meaning that observant Jews can enjoy a cake pop after a meaty meal. A full selection of coffee and espresso drinks provides customers with caffeine every day.

“We hope to make Jewish food modern,” says Marcus. “It’s going to be really cool and special for the city.”

These efforts to update the classics will continue in the new café and delicatessen, which can seat 300 people in an area of ​​5,000 square meters. Saghian offers some tips, including on-site smoked deli meats, sliced ​​nova and salmon at the table, plus a full liquor license with cocktails. Construction of the space is currently underway, with the aim of opening it in May. Unlike the bagel shop, it won’t be kosher, so diners can order a bacon cheeseburger. The goal is to keep improving the Saskatoon Delicatessen game.

“We’re bringing new recipes to the deli and new ways to present these things,” says Gurnani. “There we go from here. Everything is made from scratch. This is my strong point. “