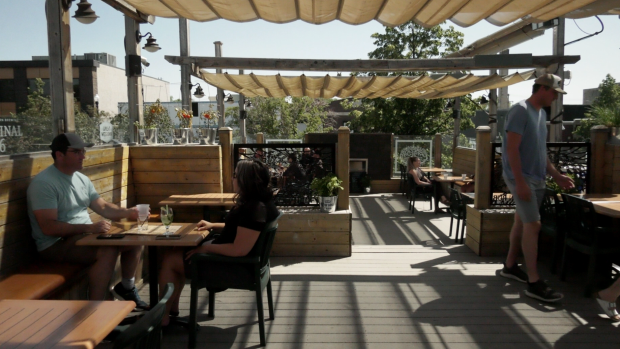 SASKATOON —
It’s been two weeks since restrictions have been lifted in the province and some Saskatoon restaurants are noticing a surge in business.

“The (lifting) of restrictions brought a few more people out,” said Ryan Grills, owner of The Yard and Flagon Pub, “We’re probably up 75to 85 per cent of what our sales would have been pre-pandemic.”

Due to staff shortages Grills has the restaurant operating at 75to 80 per cent capacity.

“I don’t have staff to be able to go to 100 per cent capacity and there is still some apprehension, at least from some of my customers that you know were still seeing mask wearing,” said Grills “I think I’ll gradually start increasing my capacity if I can increase my staff.”

Grills also operates The Rook and Raven Pub and he says hasn’t seen the same surge in business The Yard and Flagon Pub is experiencing since it’s located downtown.

“Downtown’s a little bit different, obviously a lot of offices are still fairly empty, the hotels are still not up to capacity,” said Grills “We’re still not seeing as many shows as we used to.”

The restaurantis operating at 100 per cent capacity and has seen an increase in numbers compared to pre-pandemic sales from July of 2019.

“I mean the government is still paying a little bit of unemployment,” said Baba “It’s hard to find kitchen help at this time, front of house help.”

“Some people seem to be pretty content to take the summer off and maybe continue to get EI,” said Grills. “Whence that starts to look like it’s finished, I think we’ll hopefully have a little bit more luck getting people back to work.”