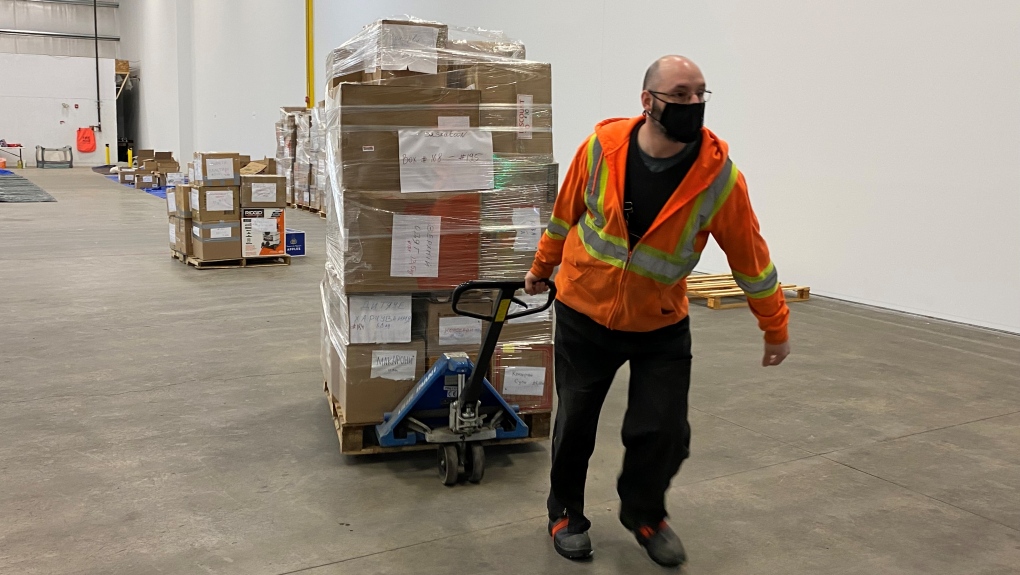 Rostyk Hursky proudly watched on as eight towering pallets filled with much-needed supplies were loaded into a semi Monday for delivery to Ukraine.

About a week ago, Hursky and his wife Olesya began calling anyone they knew to organize a donation drive for Ukraine following Russia’s invasion into the country.

Within four days, the greater Saskatoon community answered by securing a warehouse with dozens of volunteers sorting, weighing and packing thousands of donations — including everything from blankets and diapers to night vision goggles for fighters.

“The feeling is surreal. I have goosebumps going on right now. Just to see in four days what we were able to gather and for it to be able to actually start going and the immense feeling of how it is in Europe right now,” Hursky said.

Last Tuesday, the Hursky’s non-profit Stream of Hopes partnered with Ukrainian dance groups in Saskatoon to spread the word for donating vital supplies like food, clothing and blankets. The Van Norman family donated a warehouse at 3403 Faithful Avenue the next day. Between Thursday and Sunday, supplies trickled in as the pallets were quickly filled.

“In Ukraine, they’re receiving all this aid from all over the world. And just the logistics of organizing it and shipping it and distributing it. This is the beginning,” Hursky said of the worldwide push to help Ukraine.

Kindersley Transport Ltd. donated the semi on Monday where the 3,650 kilograms of supplies will end up in Toronto later this week. The boxes will then be loaded on to a plane destined for Poland, before supplies are distributed to depots in Ukraine.

Hursky said other groups and corporations are beginning to notice and are pledging to send supplies to the warehouse. One man even approached Hursky to see if he could secure a cargo plane that would travel directly from Saskatoon to Poland. Whether it comes to fruition or not, it shows Hursky how the war in Ukraine is affecting people in Saskatchewan.

“Is it a possibility? I think everything is, but we’re doing whatever we can now because they need our help right now,” Hursky said.

The warehouse is accepting donations Monday to Friday from 5 p.m. to 9 p.m. and on weekends from noon to 9 p.m.

Being a parent to young children and working as many hours as possible to accept and coordinate donations is keeping Hurksy busy, but he refuses to say he is tired.

“Just imagine … you’re sitting as a soldier or volunteer somewhere and, you know, not sleeping for three days. I’m not tired in comparison to them. I have a home, I have blue skies clear above my head. So we get our energy from the individuals that are inspiring us in Ukraine. They truly are inspiring. I think they’re inspiring the world. It’s showing who we are as Ukrainians,” Hursky said.

Hursky said the north industrial warehouse will continue accepting donations for at least the rest of the month.