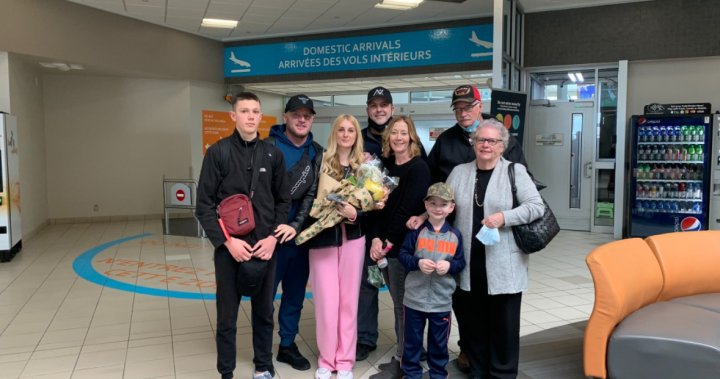 Kari Belcher had been waiting months to see her brother again and now she finally has.

Bryce Walker is a Canadian citizen. Three years ago he moved to Ukraine. There he met his girlfriend and her son and they started to become a family. But in February 2022, Russia attacked Ukraine and they didn’t know what to do.

“Nobody wanted to leave. We didn’t want to leave either,” Walker said.

Family stuck in Poland finally gets approved for visa, plans to come to Saskatoon

Soon after the war began they evacuated Rivne, Ukraine and made their way to Warsaw, Poland. After struggling for months to get visas approved to be able to come to Canada, they finally got on a flight and landed in Saskatoon on Saturday evening.

“We’re here, three airplanes, some layovers, lots of document-checking, and lots of security, but we’re here, we made it,” Walker said.

After roughly 25 hours of travelling, Walker says he’s relieved to be safe.

“This is nice to be back and we’re going to be here for a while now,” Walker said.

However, he is feeling mixed emotions.

“Really sucks to leave and especially in the way we had to leave on Putin’s regard, Putin chased us out of our home,” Walker said.

Walker says he is worried about his friends and family who are still in Ukraine.

“We had rocket attacks in Rivne, a television tower was hit with a rocket and 20 people were killed, the airports been hit, it’s nerve wracking they’re still there. They’re strong people, they’ve been through a lot in their lives living in Ukraine. They’re not afraid, so their strength makes us feel better. ”

Belcher says she’s so happy Walker and his family are here.

“It’s nice though, it feels, it feels like home,” Walker said.