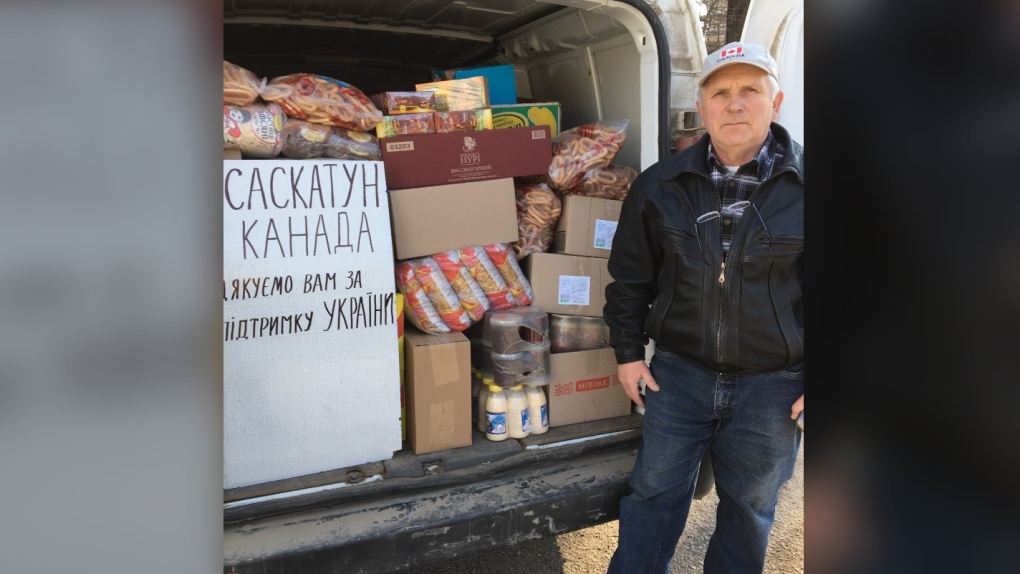 Money and aid continue to be collected for the people in Ukraine and one Saskatoon family is seeing the results firsthand.

“Thank you Saskatoon, thank you Canada, Slava Ukraini, Heroyam Slava.” These are the words 67-year-old Mykhailo Buzin, who doesn’t’ speak English, said during a Facetime call with his family in Saskatoon.

His daughter Nataliia Garmasar and her family own Slavianka Ukrainian Store in Saskatoon and they have been sending 10 per cent of their sales to Buzin.

“He will deliver to hospitals in Vinnytsia and the volunteer centre,” Nataliia Garmasar told CTV News.

Buzin was told he was too old to join the troops, so instead he buys supplies in his city of Vinnytsia, which Nataliia Garmasar saysis in the green zone. That means stores are still open for now.

“My parents call the volunteer centre and ask what exactly to do you need, then they buy it and deliver it,” she says.

On his delivery van, Buzin displays a sign which reads in Ukrainian:

With this sign, he is thanking Saskatoon for supporting Ukraine and letting those who are picking up supplies know where they are coming from.

Iaroslav Garmasar moved to Saskatoon when he was six and is impressed by how the people of Saskatchewan have come together for his homeland.

“They heard about this through the internet or wherever and they are banding together money or whatever Ukraine needs, a lot of things they’re sending. We’re very grateful. Thank you, everybody,” Iaroslav Garmasar told CTV News.

Many people come into their store who are not Ukrainian but just want to help. That outpouring is overwhelming at times, according to Nataliia Garmasar.

So far with that support, they’ve sent $20,000 to her parents to buy supplies. A team of volunteers makes deliveries in both central Ukraine and into the eastern areas which have been hardest hit.

The Garmasars hope support keeps coming in now more than ever because the situation is intensifying with more casualties being reported, they say.

“Physically we are here, but our hearts, our thoughts are in Ukraine with our parents, relatives and friends.”