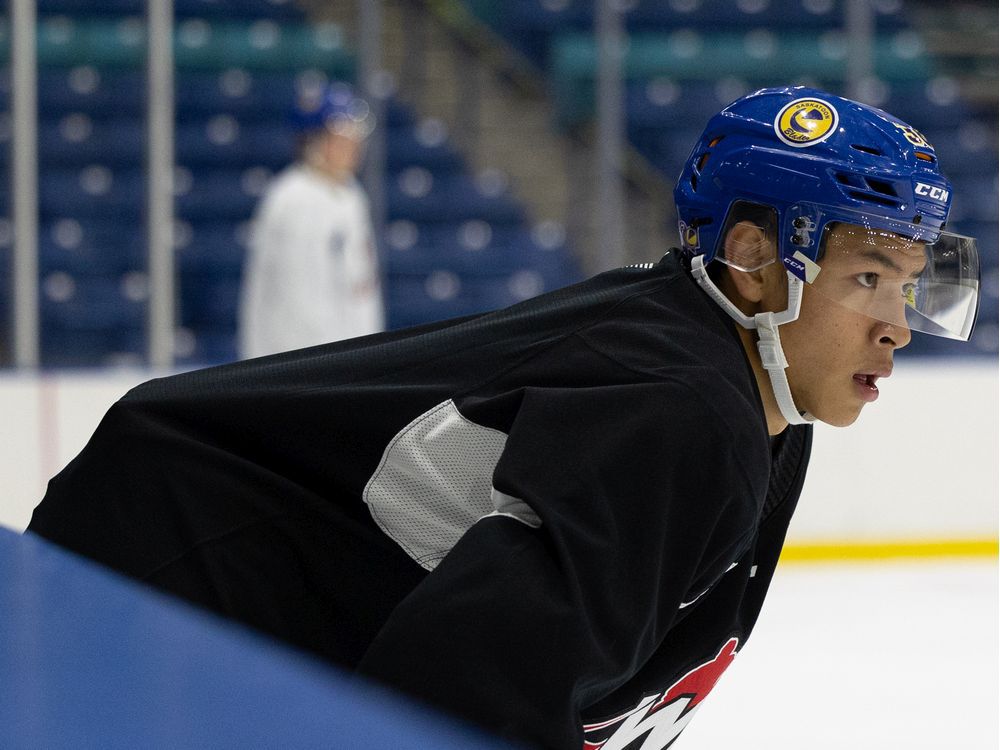 “A little sad at first, but as soon as I left the rink and got in my car, it was kind of moving on to the next page right away.”

Trevor Wong, who was acquired by the Saskatoon Blades in a trade Tuesday, takes to the ice in a practice with his new team Wednesday morning. Photo taken in Saskatoon on Wednesday, Sept. 29, 2021. Photo by Michelle Berg /Saskatoon StarPhoenix

Today, Wong finds himself the newest member of the Saskatoon Blades after he was acquired Tuesday from the Kelowna Rockets for Colton Dach.

“Obviously I was a little shocked at first — I had no idea — and a little sad to leave my buddies there,” Wong said Wednesday after his first practice with the Blades.

“A little sad at first, but, as soon as I left the rink and got in my car, it was kind of moving on to the next page right away. I heard nothing but good things about Saskatoon. I have a couple of buddies (Brandon Lisowsky and Spencer Shugrue) here.

“First practice under the belt, it feels good to be here.”

Last season, Wong had six goals and 10 assists for 16 points in 16 games with Kelowna during the COVID-19-shortened 2020-21 campaign. He was picked in the first round, 18th overall, by the Rockets in the 2018 WHL Bantam Draft.

Dach, who was chosen sixth overall in the first round of the same WHL Draft, had 11 goals and nine assists for 20 points with the Blades in the Regina bubble last season. Dach went on to be taken in the second round, 62nd overall, by the Chicago Blackhawks in the 2021 NHL Entry Draft.

“Just to be traded for Colton Dach, a player like him, is very special,” said Wong, a 5-foot-9, 155-pound Vancouver native. “He’s a second round NHL Draft pick; I was undrafted. To see the trust these guys have in me, willing to make that one-for-one trade, is pretty good.”

After arriving at the rink Tuesday for a Rockets practice, Wong was told he had been traded to the Blades. In short order, he said his tearful goodbyes, packed his stuff, got a ride to the airport with a connecting flight to Vancouver and then on to Saskatoon, arriving in the Bridge City around 1 a.m. Wednesday.

After a few hours of sleep, he was back on the ice, this time with the Blades.

“I give him a lot of credit for a wild day that it was and how well he handled it,” said Blades general manager Colin Priestner.

“He had quite a day. Ultimately, we’re very pleased with getting Trevor. He’s an unbelievably good kid from all accounts and just a very talented hockey player, centerman, that’s going to play the style of speed and skill we want to play with. He’s already a point a game guy and we also feel he’ll be here as a 20-year-old, which Colton likely wouldn’t be in the league as a 20-year-old.

Wong has already played one game at SaskTel Centre. He did so as a 16-year-old call-up by the Rockets.

And he does have some Saskatchewan ties.

“My dad was actually born in Moose Jaw and he has a couple of friends here,” he said. “I think my dad is coming out this weekend to his hometown and watching me play.”

“He is a skater, man,” said Sonne. “He’s fast, shifty, smart. He’s quite a player. I’m really excited to get him integrated and up to speed to where we’re at.”

As it turns out, Sonne and Wong both come from west-side Vancouver.

“Pretty cool to see someone out here from the exact same area that I’m from,” offered Wong. “It’s five, 10 minutes from where I was born. (Sonne) seems like a really good guy, easygoing, but he demands a lot and that’s what makes this team good. I’m excited to be part of it.”

“It’s a whirlwind when you get traded. It’s not easy. Chatting with him (Tuesday) and him going through the travel day (Tuesday night) and getting in late, up at whatever doing his workout at 8 o’clock (in the morning) with the guys, it’s a whirlwind.

BLADE BITS: Defenceman Aiden De La Gorgendiere is expected to be announced as the new Blades captain, replacing Chase Wouters , who is pursuing his pro dream with the NHL’s Vancouver Canucks organization.