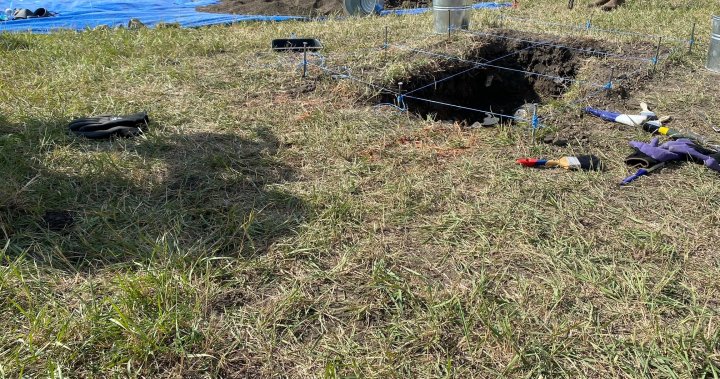 Police investigators from all three Canadian coasts, as well as one from the northern United States, are in Warman, Sask., this week for a Forensic Anthropology and Identification of Human Remains course.

It’s designed as an introductory course to forensic anthropology, as well as the search processes, recovery and identification of human remains.

“Garments, clothes, cellphones, needles, all kinds of ornaments,” begins Dr. Ernie Walker, a forensic anthropologist in Saskatchewan. “Shotguns, casings, shotgun shells — I mean it’s all there. It just doesn’t smell as bad as it normally smells.”

Walker says he’s the only forensic anthropologist in the province, and says he’s worked on almost all of the missing woman cases in the province during his 40-year career. He’s also worked on notable cases such as ’90s Saskatoon serial killer, John Crawford.

“We have to dig those holes and put those remains in, try and make it as realistic as possible.”

“A lot of planning goes into this and it is in fact a major crimes unit that actually puts this course on in the RCMP.”

Some attendees at the course also work in historical or cold case and forensic identification units.

“We organized this to create opportunities for investigators to come out and get hands on experience and that’s the biggest thing.” says Sgt. Donna Zawislak, a member of the Saskatchewan RCMP Historical Case Unit.

“We can read about it, we can watch about it. There’s a lot of videos out there that people can access, but there is nothing like going out there and actually doing the work.” Zawislak adds.

Cities and towns such as Saskatoon and Dundurn have hosted the course before, which usually occurs every two years.

Thursday’s training ground was located at the Warman Fire Training Department training ground, making it the first time it was conducted property owned by the city.

“When it came up for a chance to help the RCMP out and collaborate with them on not just a provincial course but a national and now international course, it was a no-brainer,” says Russ Austin, the chief of Warman Fire/Rescue Department.”

“Anytime we’ve ever asked them for extra training for evidence recovery or traffic scene stuff they’ve always been gracious and come and helped us.” Austin continues.

Chief Austin says while the grounds have hosted regional and provincial courses in the past, they haven’t with one this widespread.

“We’ve had (people) actually from all three coasts in Canada come to a training session here, and from the northern U.S., which is an amazing opportunity,” Austin said.

Dr. Walker says the course has been operating since the 1990s, and adds a lot has changed with the technology used.

“The use of ground-penetrating radar, which has gained some notoriety because of the residential school situation,” he said. “There was a drone flying around here earlier a while ago. So that’s used for mapping and making scene photographs.”

As for what to look for after remains or evidence have been found or recovered, Walker says it’s a multitude of qualities.

As for the process itself, Sgt. Zawislak says it needs to be done right.

“We want people to understand that they can watch a TV show and they find someone’s remains and they go there and collect everything and they’re done within their little time frame,” starts Zawislak.

“That isn’t the case here.”