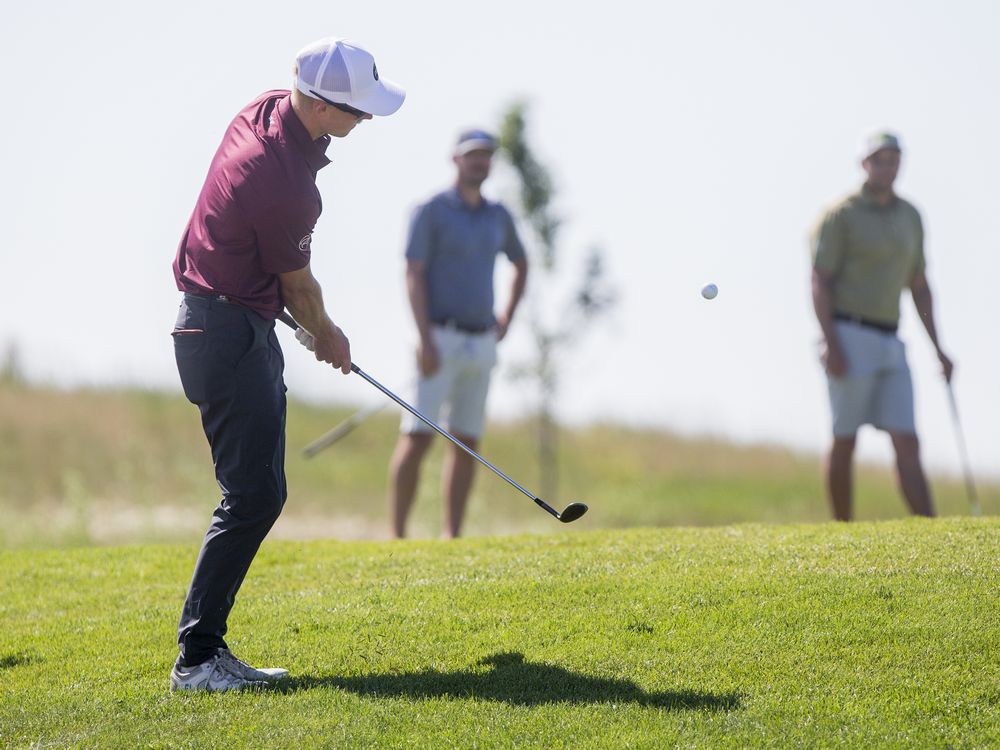 “We had a lot more people who wanted to play but couldn’t get on because of less seats on the bus, so to speak.”

With social distancing in place, Ty Campbell chips for the green during the final round of the the 109th Saskatchewan Men’s Amateur golf tournament. Photo taken in Warman on Friday, July 24, 2020. Photo by Matt Smith /Saskatoon StarPhoenix

The COVID-19 pandemic didn’t stop Saskatoon-area golfers from teeing up like crazy.

The number of rounds played was up everywhere as golfers found solace in a sports activity that they could do safely, evidently, outdoors.

“That was because there was nothing else to do,” says Robert Klombies, executive director at Riverside Country Club. “There was no travel. No in-school (learning). There were no other activities at all. So the only thing people had at hand was to go golf. Certainly all the golf courses across the country were experiencing a high demand.”

Tee times were at a premium.

Courses could only accommodate so many golfers on a daily basis, so some golfers were left out.
Private courses incorporated a lottery system.

“Our lottery sometimes had 350 people in there and you could only place 240-250 on the (tee) sheet,” said McLaren Taylor, general manager of the Saskatoon Golf and Country Club.

While golf clubs lost out in revenue on the food and beverage side, plus the tournament side, some were able to make up for it with green fees.

“Overall, we took something that was unknown and we actually had a good overall year under the conditions, and staff adapted well to the changes we had to do and most patrons were great and very understanding and patient,” said Brad Vinnick, general manager at Greenbryre Golf and Country Club. “It was a win-win for golf in Saskatchewan.”

Here’s a quick glance at how Saskatoon and area courses fared during the pandemic season:

GM Mike Jacobs said the links course was up probably close to 2,000 rounds.

“Overall, it was pretty successful,” he said. “It was up a nice amount considering we were missing almost a month to start the season. It was certainly a little different. It was a decent year, considering what it could have been.”

It was not all good news. Dakota Dunes typically runs several tournaments, but it couldn’t this year.

“Food and beverage side of it lost a lot more,” noted Jacobs, “with the tournaments not being played.”

Rounds played were on par with past years.

Vinnick said he saw lots of new faces, “which was good, as kids’ soccer and ball was put on hold. So what are you going to do now for exercise? The tee times were stretched right from 6 in the morning, at 10-minute intervals eventually.”

He added that COVID “affected us drastically” in terms of tournaments Greenbryre normally would have hosted. Banquet revenue was also down “by a huge amount” and weddings were cancelled.

“The city courses actually did quite well,” said Andrew Roberts, director of recreation and community development for the City of Saskatoon. “Our rounds were up for the period of time we were open.”

However, city courses did not quite meet their budgeted total because of a delayed start to the season due to an initial COVID shutdown.

“But, by the end of the season, we actually did quite well and rounds in total, for the period we were open, were actually 12 to 15 per cent higher than what we would have seen in previous years,” added Roberts.

“Overall, we managed to have a very good year,” concluded Roberts.

Club president and greens superintendent Murray Lee said Moon Lake was up “about 20 per cent” in overall rounds.

Green fee revenues helped to make up for the shortfall in food, beverage and merchandise sales.

Even though Moon Lake was open for not quite five months — “it was, like, the shortest season we’ve even had in 30 years we’ve been doing this” — it turned out to be a very good year, he said.

“Slowly, people got kind of adjusted to the new ways that we operated with distancing and cleaning and everything,. Then it got quite busy. Through the middle to the end of the season, we probably three of the best months we’ve ever had in June, July and August, and that was without tournaments.”

Riverside, a private club, was able to fit in as many rounds as it could for its members.

“We had about 6,000 more rounds than we had in 2019, and 2019 actually was a pretty strong year compared to other years. Definitely the demand was there. Once everybody got out and started walking around and playing golf, it was great. But we were changing our protocols and operations on a weekly basis based on the easing of some of the restrictions the government had in place.”

Klombies called it “an interesting year” with revenues significantly down in areas like food and beverage, retail sales and tournament play.

“Overall, it turned out to be a good year, surprisingly enough,” said general manager McLaren Taylor. “We lost a lot of revenue on tournaments, but we made up for it on membership sales and then we had sort of the ongoing frustration with 10-minute tee times and trying to get as many on the golf course who wanted to play. So we had more rounds played, but we had a lot more people who wanted to play but couldn’t get on because of less seats on the bus, so to speak.”

McLaren said the club probably could have squeezed in another 3,000 tee times, and 12,000 golfers, with shorter tee-time intervals for its 800-plus members.

“We were probably up from 25,000 to 31,000 to 32,000 rounds of golf. So we were up 25 per cent in rounds played. We could have been up way more than that here because we have so many members who wanted to play, but they were frustrated because they couldn’t get on the golf course.”

That was up by about nine per cent.

“For us, period to period, the revenues in golf, per se, were as strong and slightly stronger,” said Eriikson, adding that the season was about a month shorter, however.

“Our total round count in the same period was up slightly. For us, as an operation, because we have a fairly large food and beverage component, with big assets, that is where you’d be sort of parallel to a lot of the hospitalities and, like the rest of the hospitality industry, we took our lumps.

Davidson Matyczuk, general manager and PGA of Canada head professional, said the Legends certainly did okay during the pandemic.

“We did a budget in April, when we learned we could open, and we exceeded everything we expected,” he said.

It was, in his words, steady as rounds were up overall by around five per cent.

“Again similar to most (course), up — up, as far as May through October,” noted Matyczuyk, adding that the season was shorter than usual because of the initial pandemic delay in opening.

“We were all cautious going in, then we were surprised how busy it was. I guess with other activities not happening and all that stuff, it was steady all through the year. You had to book three days before to get a tee time, kind of thing.

“People were even booking a tee time at 5:30 in the evening, knowing they might not get 18 holes in, just because it was such a premium to get a tee time.”